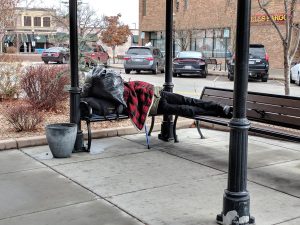 On the same night that Grand Junction City Council will consider adopting an inclusiveness proclamation that says the City “desires to ensure that the human rights of all citizens are protected,” council will also vote on whether to amend city code to ban camping on public property, which will effectively criminalize a homeless population who has nowhere else to go.

That’s the view of the ALCU of Colorado, which has taken a great interest in the proposed change to city code, and considers it another attempt by Grand Junction to target homeless people and criminalize them.

The ACLU has sent a letter to the Grand Junction City Council criticizing the ordinance for having inadequate exceptions for people who are unable to stay in shelters.  The organization is hoping that Council will reconsider this ordinance, and is watching them carefully, especially given the city’s past record of actions that have drawn ACLU scrutiny.

In researching this issue, the ACLU found the following problems with the change in city code as it is currently proposed:

Update – On a vote of 5-1, with Duncan McArthur dissenting and Mayor Barbara Traylor Smith absent, Council voted to table this measure for 90 days.