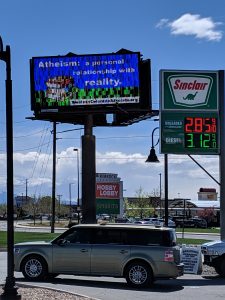 Western Colorado Atheists and Freethinkers (WCAF) has a message for Grand Valley residents this spring: Atheism is “a personal relationship with reality.”

WCAF is the area’s longest-serving secular group, and their billboard is to help encourage people come to logical conclusions based on verifiable facts rather than basing conclusions on dogma, fables, mythology, superstition or sheer faith. That’s the message of the group’s spring, 2019 billboard, which went up today on I-70B by Rimrock Marketplace in front of Hobby Lobby and Chick-Fil-A. The board is west-facing and visible to traffic coming into town. It will be up for one week. Take photos with it while you can.

WCAF is the western slope’s longest-established secular group and was created to give non-religious residents of western Colorado a long-missing voice in local affairs. The group also serves as a watchdog to defend the separation of church and state embodied in the First Amendment to the U.S. Constitution. The group’s mission also includes educating Western colorado residents about reality-based belief systems, like atheism and humanism, that don’t include a belief in gods, fairies, leprechauns, angels, devils or other supernatural beings.

Colorado and the U.S. are becoming less religious

A 2015 Pew Religious Landscape survey reported that as of 2014, 22.8% of the American population is religiously unaffiliated. Data shows that younger generations are far less likely to be religious (pdf) than older generations. In 2017, 33 percent of Colorado’s population reported being religiously unaffiliated, (pdf) according to a report by the Public Religion Research Institute based in Washington, D.C.

If you are a western Colorado resident and want to report a violation of separation of church and state, or if you are non-religious and want to connect with fellow nonbelievers, or just want information on how to donate to projects like WCAF’s billboards, visit WCAF’s website.