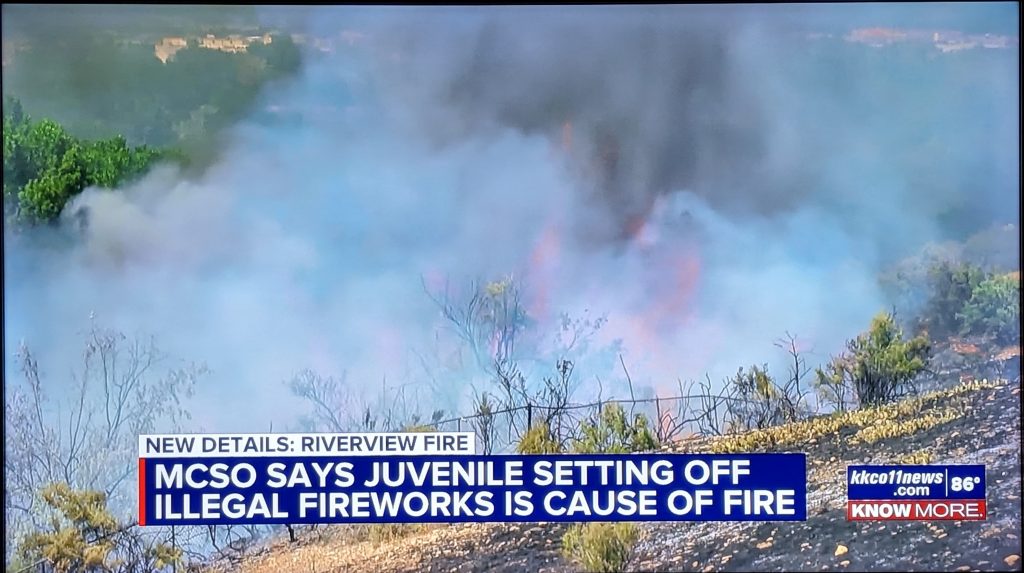 Kids playing with illegal fireworks on 7/4/2019 started a fire that threatened to burn eight houses on the Redlands.

Independence Day in Mesa County offers fun and entertainment for many, but also causes fear, anxiety, property loss and taxpayer expense from fires and injuries.

This year, kids playing with illegal fireworks started a wildfire that endangered eight houses on the Redlands. The residents were briefly ordered to evacuate.

In 2015, people using illegal fireworks set a field on fire on Chestnut Drive in northwest Grand Junction. The fire got so big that it required the help of fire departments and law enforcement from Clifton, Lower Valley and East Orchard Mesa, the Bureau of Land Management, the Grand Junction Police Department, the Mesa County Sheriff’s Office and the Colorado State Patrol.

What is an illegal firework?

ANY firework that leaves the ground or explodes is ILLEGAL. This includes bottle rockets, cherry bombs, aerial shells, M-80s, etc.

Legal fireworks don’t make loud noises, don’t leave the ground and don’t move if tipped. A big part of the problem is that under Colorado law, selling or using illegal fireworks is a Class 3 misdemeanor that carries $50 to $750 fine and up to six months in jail — basically just a slap on the wrist, and even that small penalty is practically unenforced in Mesa County.

Residents must increasingly endure scofflaws who set off illegal fireworks not just on the holiday, but for days before and afterwards. These dangerous and offensive fireworks jolt people from sleep, send combat veterans diving under their beds for cover and drive anxiety-filled pets, trembling in fear, to jump fences or cram themselves behind major appliances.

But the awful noise is just one aspect of the problem. Illegal fireworks threaten our community in other ways:

The National Fire Protection Association (NFPA) says consumer fireworks start an average of 18,500 fires every year across the country, including 1,300 structure fires, 300 vehicle fires, and 16,900 other types of exterior fires. On average fireworks kill three people, injure 40 civilians, and cause $43 million in property damage every year. Sparklers alone, which many people believe are safe, burn at over 1,200 degrees Fahrenheit and account for more than one quarter of all emergency room visits.  Males are disproportionately affected by fireworks burns and injuries, too; 70% of all reported victims of fireworks injuries are male.

Every year since 1976 (pdf) between 7,000 and 12,000 people have been seriously injured by fireworks nationally. People lose vision, fingers, hands, legs, hearing, and even their lives in fireworks accidents. Survivors are often left with life-long disabilities, further costing society. In 2010, a teenager who had hoped to join the Marines was permanently disfigured (video) after bottle rockets he was carrying in his pocket were accidentally set on fire by a burning ember. In 2011, a North Dakota man was decapitated by an illegal firework. On July 4, 2018, a  Baltimore man had his fingers blown off when using fireworks. The next day he shared what had happened to him with the public in a news segment, to try and warn people. In April, 2019, 13 year old Javonte McNair in Ft. Lauderdale, FL had his hand blown off (video) and eye injured from an illegal firework. And in case you think people in general have the ability to handle fireworks intelligently, this video compilation of fireworks fails will dispel that myth. It shows how incredibly thoughtless people can be when handling fireworks, and that people intentionally use them in ways that cause serious bodily harm to others. This video shows some yahoos playing with illegal fireworks and almost setting their neighborhood on fire.

But all the injuries, deaths and property damage associated with illegal fireworks hasn’t stopped Grand Valley residents from using them. Instead, the problem is increasing. That, and a complacent attitude of local law enforcement, means the problem will continue to get bigger until it gets out of control. By then it will cost a lot more to address it, if that is even possible.

Local newscasts reported area law enforcement agencies received 130 calls for illegal fireworks on the Fourth of July, but that NO citations were issued, and police only gave out warnings. Why? Megan Terlecky of the Mesa County Sheriff’s Office said, “Our staff can’t get to all calls,” and that law enforcement resources on July 4th this year were largely diverted to the Redlands fire. She also pointed out that by the time officers respond to illegal fireworks calls, the fireworks had usually stopped. Terlecky said the MCSO’s main concern on the Fourth of July is fires, which keep emergency responders very busy. She also said that in addition to the fires caused by fireworks — their main priority — officers had to respond to all the normal calls they usually get for medical help, domestic violence etc.

The problem is already overwhelming local emergency response resources, so why isn’t the local government doing anything to address the problem?

Let’s not let that happen here. It’s time to recognize the problem and take action.

Local government could take a LOT of proactive action to curtail illegal fireworks if it wanted to, much of which could be done at little or no cost.

Here are some of the things other communities across the country have done, or are doing to address the problem:

— Los Angeles has a website that allows people with just a few clicks to create their own highly visible yard signs that say “We oppose illegal fireworks.” The signs display a phone number where people can report use of illegal fireworks. Visitors click on the link, pick a sign size, and click to send the print job to the print shop of their choice, like a Copy Copy or Office Max. Everyone pays for their own sign, but the effect is the look of an area-wide campaign to make people aware that neighbors are watching and will quickly report their illegal fireworks. Here is an example of such a site, and signs provided by the City of Los Angeles: http://www.mysafela.org/fireworks-sign/

Fireworks are on their way out anyway across the state and the country, and for good reason. There are smarter, quieter, safer and more awesome alternatives that are a wiser investment of taxpayer dollars.

Increasingly, old-fashioned fireworks shows are being replaced by

Drone light shows, and no wonder. They make far more sense. They aren’t just a far safer alternative, but a far better investment of taxpayer money, too. Drone shows don’t force municipalities to burn up tens of thousands of taxpayer dollars every year on a fireworks show. Instead, a municipality can purchase drone light show equipment, create its own unique, proprietary show and take the money it would have burned every year putting on a fireworks show and instead use it to augment its own show by adding more drones every year to make the show ever more spectacular and keep crowds coming back for more. A 20-drone show is more of a “wow” than you would think. It only takes just 100 drones to make amazing, three-dimensional graphics in the air. Copper Mountain has started putting on a drone show on Saturdays this summer to try to pull travelers off I-70 who would otherwise bypass their community and go to Vail.
My guess is Copper Mountain will be rewarded for being forward-thinking and investing in this spectacular, new, awesome, safer technology. I also predict some day in the near future, just like cigarette smoking, fireworks will become obsolete.