Full disclosure: I was the plaintiff in the lawsuit that the American Civil Liberties Union of Colorado brought against State Senator Ray Scott for blocking constituents from his official social media accounts.

On August 31, 2019 the Daily Sentinel printed an article about the settlement we reached in the case.

Had the Sentinel contacted me for this article, I would have let them know that Ray Scott lied to them about several specific pieces of information regarding the case.

Scott told the Sentinel that he blocked people from his social media accounts “only if someone posted a profane or inappropriate comment.”

That is absolutely false. 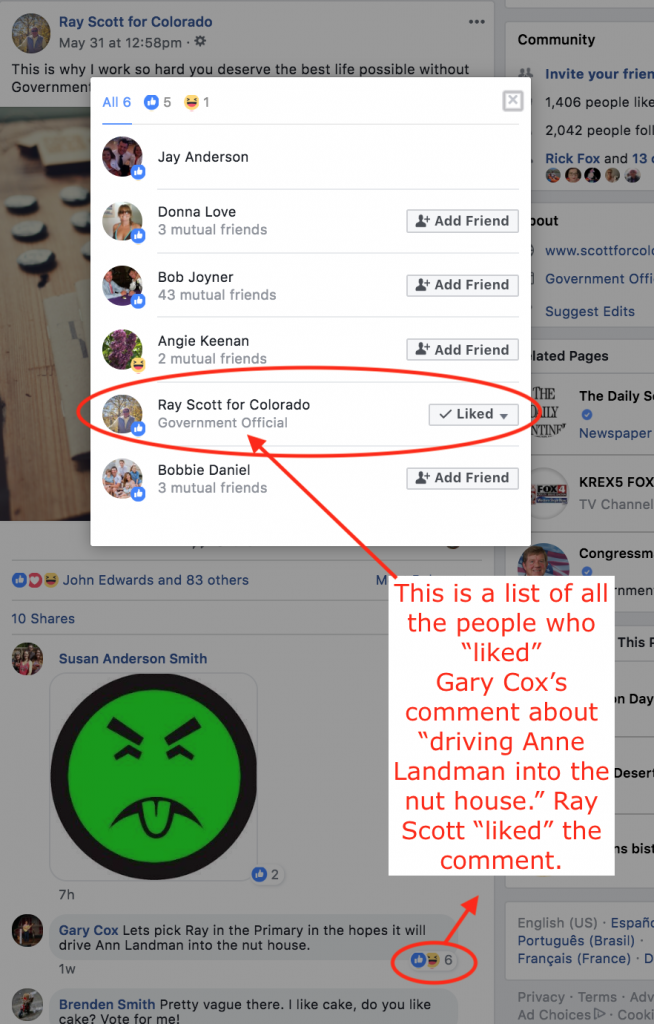 Ray Scott made fun of the constituents whom he had blocked on his social media, knowing all the while they  could not respond.

I have never posted anything — on Ray Scott’s or anyone else’s social media or anywhere — in my entire life that was profane, crude, vulgar, obscene, vile or threatening, or that would in any way disappoint my own mother or that I would not want to appear on the front page of the New York Times.  This is my personal policy for posting anything online. Because I hold myself to this standard, I felt completely comfortable turning over everything I had ever posted on any of my blogs and social media since the beginning of time to my legal team for them to comb through to use as evidence for this case. There is nothing profane, off-color or inappropriate in anything I’ve ever written.

What is the truth, then? The truth is that Scott blocked me in July, 2017, after I posted a link to a blog I wrote in which I criticized his poor grammar and worrisome lack of knowledge about environmental issues.

Scott’s second lie was when he claimed that he unblocked everyone “soon after” Senate President Leroy Garcia settled his social media blocking case for $25,000.

It actually took him until at least a month after that to get around to unblocking constituents.

The Senate decided to settle Garcia’s blocking case on April 4. News about Garcia’s settlement hit the Pueblo Chieftan on April 16, 2019. At that time I was still blocked from Scott’s social media. Scott kept me blocked  throughout the rest of April and well into May. Prior to filing our case, my attorneys asked me to send Scott one last email asking him again to unblock me, in the hope that he would be able to avoid the entire lawsuit. I sent that email to Scott on April 30, 2019. We waited two weeks to hear back to allow him plenty of time to unblock me and avoid a lawsuit. He didn’t, so we moved forward with filing the case.

Scott only rushed to unblock me and everyone else he had blocked AFTER we filed the lawsuit on May 13, 2019. 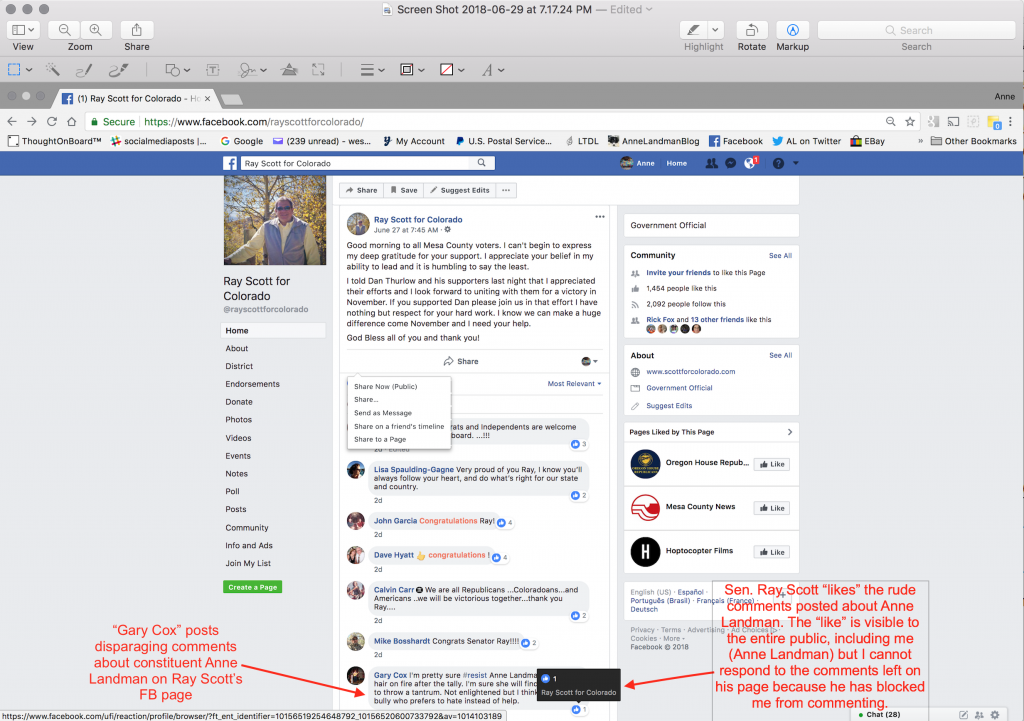 Scott’s third lie was when he said “the law still isn’t clear on what an elected official can and cannot do when it comes to social media accounts.”

The law has been pretty clear for some time, and if Scott had harbored any shred of doubt on where the law was going on this topic, he could easily have erred on the side of caution and unblocked constituents to stay out of trouble.

By the end of 2017, several courts across the country had produced very clear rulings concluding it was illegal for legislators to block people from their official social media accounts. In August of 2017, two other people and I filed a forma; ethics complaint with the State Senate against Scott that cited these legal rulings and explaining that Scott was violating our First Amendment right to free speech by blocking us from his online public forums. Then-Senate President Kevin Grantham, a Republican pal of Scott’s who provided a pivotal vote on the three-person Senate Ethics Committee, dismissed the complaint saying Scott hadn’t “violated any senate rules.” Grantham’s response dodged the issue completely. We hadn’t charged Scott with violating any senate rules. We charged him with violating our civil rights under the First Amendment to the U.S. Constitution, which he swore to uphold (pdf) when taking his oath of office. Whatever the Senate President ruled, though, a responsible state senator would have taken our complaint seriously and been careful not to jeopardize himself and risk taxpayer money on a lawsuit by continuing to block constituents at that point.

In our legal complaint (pdf) filed in May, my lawyers cited five legal rulings, including one against President Trump, that concluded that elected officials violated citizens’ first amendment rights by blocking them on social media.

Scott ignored all of this case law and even now still claims the law is still unclear. Scott is either unable to absorb information or is being willfully ignorant on this count, perhaps both. 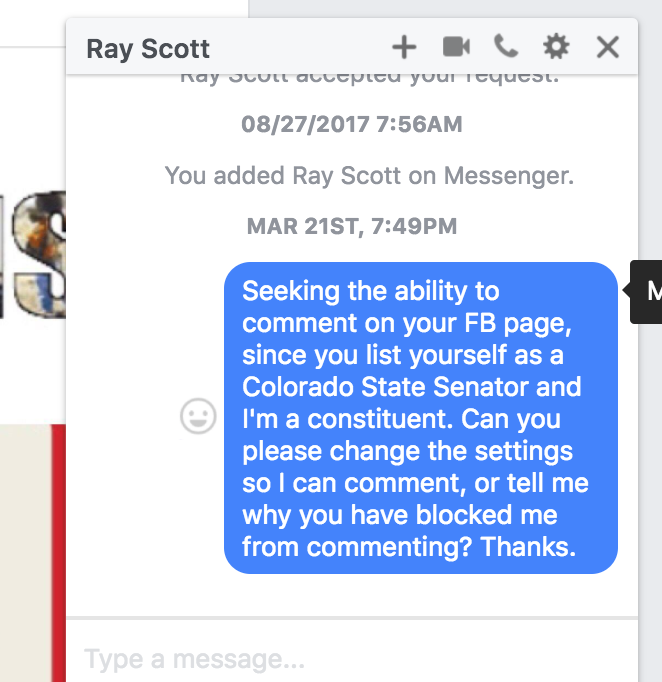 One of many messages I sent to Ray Scott prior to filing a lawsuit, seeking his justification for blocking me. Scott had many such opportunities to avoid a lawsuit and ignored them all.

Scott had two years of red flags and flashing red lights that warned him he was courting a lawsuit by continuing to block people from his social media due to viewpoint discrimination. Scott chose to to ignore all of these warnings, and instead wasted thousands of taxpayer dollars just so he could remain a conceited legislator who was absolutely cocksure that those he was bullying were so weak and powerless that we wouldn’t have any recourse against him at all.

Scott’s fourth lie was when he inferred that the ACLU was only after money in filing this case.

In truth, I was first approached in August of 2017 by a Denver-area private attorney who offered us help after she read an article in the Daily Sentinel about the 2017 ethics complaint we filed against Scott. She recruited the ACLU to help. The ACLU has a rule that they won’t work with any attorney who charges them fees. It took two years of work by a team of attorneys from two different organizations to bring this case. The legal team spent hours combing through my and Scott’s social media threads, putting together timelines and drafting legal briefs at a cost no doubt far exceeding the $25,000 they were able to recoup in the settlement. Moreover, Scott had the opportunity to pay the settlement himself, since the actions he took that led him into trouble were his alone. Scott had many, many chances not to stick taxpayers with the tab for his haughtiness and stupidity.

He did it anyway.

In July of 2017, Scott was quoted in The New Yorker magazine saying “I was kind of Trumpish before Trump was cool.” He was boasting that, like President Trump, he feels free to openly bully his constituents, lie to the public, double-dip and can get away with just about anything. Our lawsuit and his reaction to it, most specifically his lies, certainly prove that is true. 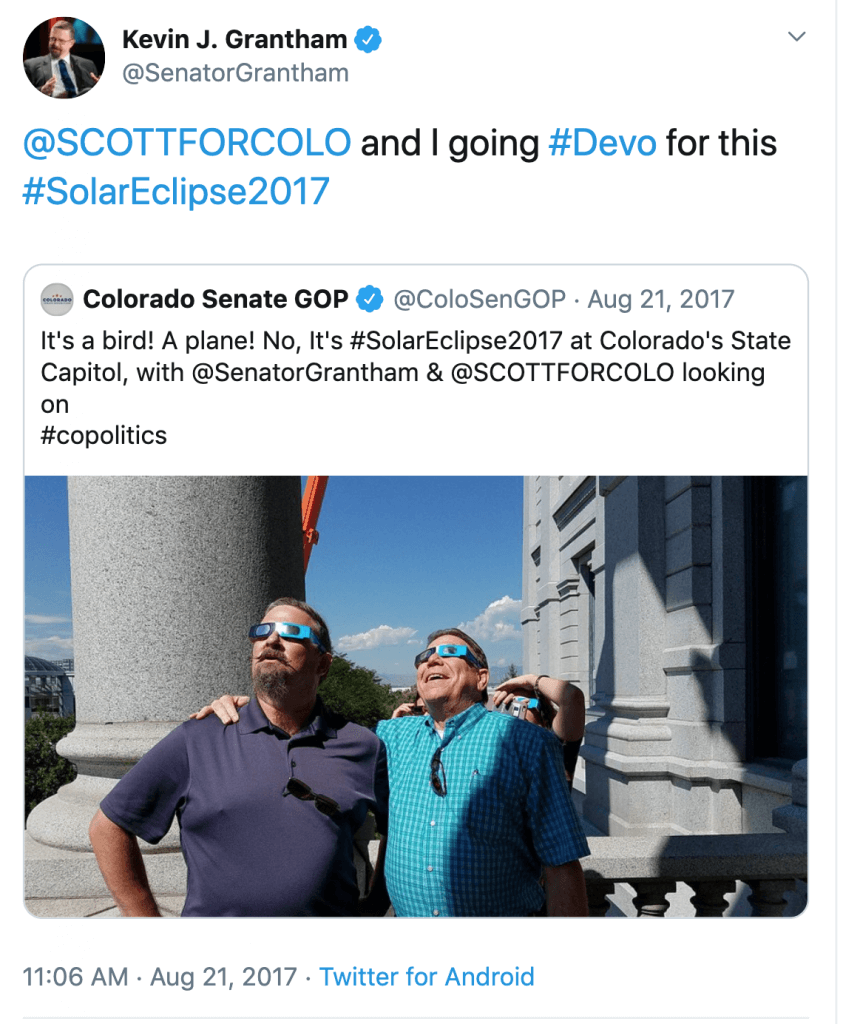 The settlement allows me to monitor Scott for any further blocking behavior, and re-open the case at any time if he violates and continues to block people. This applies to him no matter what elected office he holds.

Word is that Ray Scott is planning on running for Mesa County Commissioner. If you want a thoughtless, rude, cocksure, arrogant person who can’t absorb new information, is willing to lie to the public and waste taxpayer money on his own stupidity, then vote for him. If you’ve had enough of Scott and his transgressions, vote for someone else.