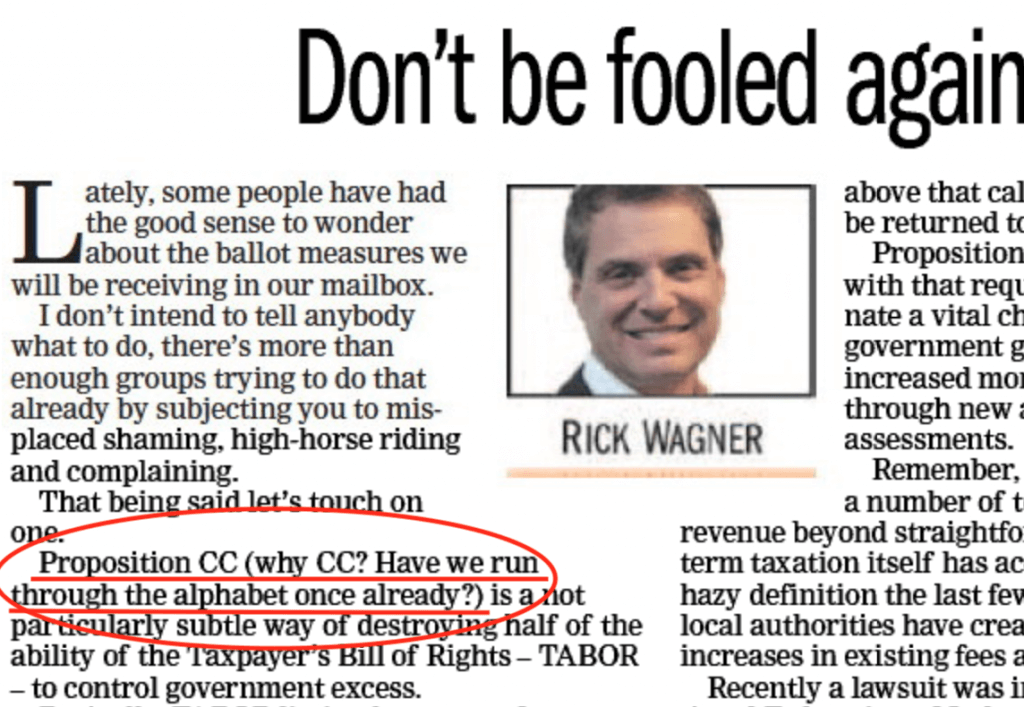 Rick Wagner’s column in the October 16, 2019 issue of the Daily Sentinel

In his column in the 10/16/2019 issue of the Daily Sentinel, local lawyer and perennially annoying right-wing political columnist Rick Wagner asks why Proposition CC on the current ballot is identified using double letters. “Have we run through the alphabet once already?” Wagner guesses, apparently attempting to infer something negative about the state ballot. He doesn’t answer the question, and is content to not to find out the real answer.

This demonstrates a common problem with right wing argumentation: They are an incurious bunch and think information doesn’t matter. Don’t know something? Gloss over it, make a joke, make some incorrect innuendo. No one cares, no big deal.

Wagner thinks his readers should just take his word for whatever he says.

This annoying little omission also demonstrates an overall problem with Wagner’s column. He takes the easy way out of posing a rhetorical question as a way to infer some kind of stupidity is afoot instead of taking the time to find real answers and provide readers with legitimate information as a basis for this thought.

The answer to Wagner’s question was as simple as calling the Secretary of State’s Elections Office. Steven Ward, head of the Title Board, is the person in charge of naming the ballot measures. Ward says ballot measures that propose amending the state constitution are identified with single letters (e.g. Amendment A, Amendment B, etc.), while ballot measures that propose making changes to statutory law are identified using double letters (e.g., Proposition AA, Proposition BB, etc.).

There you are. Simple. It was very easy to get the information. But Wagner demonstrates his lazy ethos as a writer: why bother to get real information from an authoritative source when you can write a fact-free column that relies purely on innuendo, supposition and guesswork?