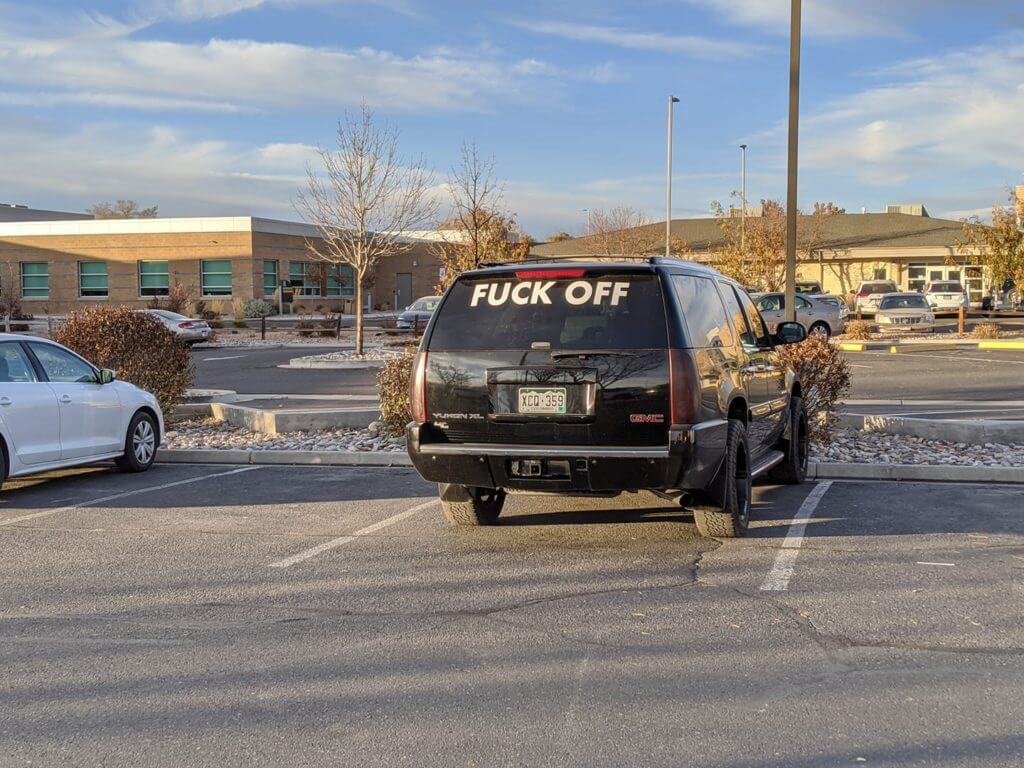 The besieged mom said seeing the vehicle at the school was “frustrating because my daughter is really impressionable, and I have to censor so much already. I don’t cuss like that when she’s around and even have to monitor what TV programs she watches. It’s hard enough without this.”

That parent was undoubtedly not alone in her feelings about this vehicle.

It’s great to know there are parents in the valley who are teaching their kids that profanity is inappropriate, but it complicates parents’ lives immeasurably and embarrasses good people among us to have offensive displays like this parading around our neighborhoods and parked outside out schools.

But what can be done about it?

The same vehicle was seen outside Chatfield Elementary School on Wednesday afternoon, December 4, at 4:00 p.m. by parents who were waiting to pick up their kids. It was also illegally parked in front of a fire hydrant.

State laws may prohibit it

Colorado Revised Statute (CRS) 18-9-111 in the criminal code prohibits “Offenses Against Public Peace, Order and Decency.” Section 1(h) of that law makes it illegal for someone to “Repeatedly … make communications in offensively coarse language to another in a manner likely to provoke a violent or disorderly response.”  Or it could come under CRS 18-9-117, which prohibits activities that create a general nuisance on public property. The decal could also be illegal under CRS 42-4-226, the motor vehicle law that prohibits a vehicle’s windows from being “covered by, or treated with any material or component that, when viewed from the position of the driver, obstructs the rear view of the driver or makes such window or windows nontransparent.” Someone could try reporting the car to law enforcement, along with the license plate number (XCQ 359) and a description of the vehicle.

But laws are only as good as their enforcement, and good luck getting those enforced here in Mesa County, where people seem to be able to get away with a lot when it comes to criminal justice. Violation of these laws are only misdemeanors or traffic tickets anyway, which doesn’t amount to much of a deterrent.

Perhaps the one way left to combat profane displays like is to gather the courage to speak directly to the vehicle owner. Let them know, without using profanity or defacing the vehicle, of course, how embarrassing their decal is to the community and you as parents, and how difficult it is making it to raise kids right around here.

Public shaming can be a powerful tool — even more powerful than laws — at helping encourage more respectful, positive behavior from area residents. It also may be all we have left to check this kind of behavior from the least respectful people among us.