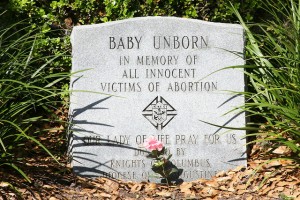 Many pro-lifers feel it is their duty to protect the interests of unborn children. (Photo credit: Flickr.)

Life begins at conception. At least that is what the Catholic Church and other pro-life entities have always maintained. They may tout this belief, but when it comes to their alleged role in the death of a fetus they are quick to drop the classification of an unborn child as a human in favor of a greater cause: their wallets.

This was made clear when in a recent wrongful death lawsuit in Colorado, a Catholic hospital defended the suit on the basis that the fetus in question was, in fact, not a human being. This convenient defense shields them from liability in this matter. This begs the question, just how deep-seated is this belief if the Catholic establishment is willing to alter their stance so readily?

The interesting thing here is that the Catholic Church is one of the loudest voices in the pro-life, pro-choice debate, yet this hospital’s pro-life stance did an about-face when it was to their financial detriment. As a Catholic establishment, aren’t they expected to follow the beliefs of the Catholic Church?

END_OF_DOCUMENT_TOKEN_TO_BE_REPLACED

A recent lawsuit filed by Minnesota Attorney General Lori Swanson reveals that medical debt collection companies are stationing debt collectors in emergency rooms where they confront patients about their existing medical bills as they enter the ER for treatment.  Medical debt collectors are also visiting patients in their hospital rooms to pressure them over their bills while they are still recovering from surgery.  Illinois-based Accretive Health uses these pushy tactics while advertising that they deliver “end-to-end revenue cycle execution” on behalf of medical providers. Accretive health often disguises its debt collectors as hospital employees who confront patients with confidential health information lifted from their medical files without notice or permission, which Minnesota AG Lori Swanson charges is a potential violation of federal privacy laws. Swanson also found that Accretive sought out pregnant women in delivery as easy collection targets, saying they “were most vulnerable in getting a pre-blanace paid.”

This is the blog of Anne Landman, tobacco document researcher and former managing editor for the Center for Media and Democracy. I will be posting news items of interest, as well as my own thoughts and commentary in this blog. I hope you enjoy it! Fee free to comment and/or circulate posts.