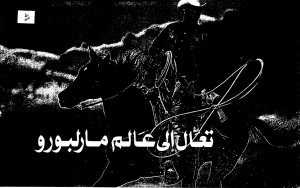 This 1993 Philip Morris marketing research report evaluates Marlboro advertising to find ways to make the imagery more appealing to young Saudi Arabian men. The idea was to find out what emotional, psychological and cultural needs and values young male Saudis have, and then determine how PM could exploit these in their cigarette advertising. Page 39 of the document (Bates No. 2501055413) reports on reactions of Saudi men to a Marlboro ad that depicted three cowboys leaning on a fence and talking. The middle cowboy held a coiled rope in his hand.  The report says, “Values disliked [about this ad] were…the ropes, which gave uncomfortable feeling — ropes are used to bind people and hang them in Saudi Arabia.” In many places, the report generalizes about Saudi men’s tendencies toward violence, in one place noting “the private face of violence noted in the Arab personality.” Another passage in this vein reads,

“There is a strong thread of violence just below the surface of the Arab personality, linked to ideas of vengeance and the protection of property (including women) but there is at the same time a desire to suppress this in favour of the more acceptable public face of masculinity, which is more calm and controlled.”

“The aspiration for them is very definitely to have friends who have status and wealth – and especially a big car.  Belonging to such a peer group, even if you do not personally have the wealth, enables you to enjoy the reflected status.  Cigarettes it seems are often shared, and within the peer group there is also pressure to smoke the same brand…”

“There is ample evidence that smoking is regarded [among Saudis] as harmful, although this was not expressed directly, it was indirectly through the description of the personality of brands…For Marlboro Red smokers, if you smoke a light cigarette, then you are not strong/healthy enough to be able to smoke a strong cigarette.  For Marlboro Lights smokers, if you smoke a strong cigarette, then you are stupid, ignorant.”

While it is not surprising that a corporation would do this type of research in an effort to tailor its advertising to appeal to foreign cultures, by the time this document was written (1993) tobacco use had already long been labeled by authorities worldwide as a major public health problem.  Despite this, PM continued to emphasize spreading the use of tobacco in foreign countries, as well as in the U.S.  It is also interesting to see how American cigarette companies scrutinize foreign cultures from a marketing standpoint, to pinpoint the emotional and psychological needs and held by people of these cultures to find ways of better exploiting them.