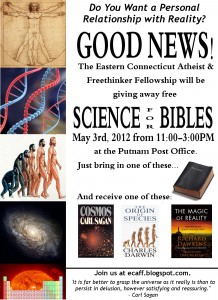 Thursday, May 3 is this year’s National Day of Reason, held the same day as the National Day of Prayer — a controversial, Congressionally-mandated and federally-supported event.  The purpose of the National Day of Reason is to raise awareness of the threat government poses to religious liberty when it enters the private sphere of worship.  The American Humanists Association (AHA), which started the event in 2003, suggests people celebrate the day with events and activities, and activities are planned around the country. The Eastern Connecticut Atheist and Freethinker Fellowship based in Putnam, Connecticut, plans to hold a “Science for Bibles” exchange that day.  Anyone who attends the event and brings a Bible will get a free copy of either Charles Darwin’s “Origin of Species,” Carl Sagan’s “Cosmos,” or Richard Dawkins’ “The Magic of Reality.” The Secular Coalition for Arizona will join the Secular Student Alliance in a walk as a group to Flagstaff City Hall, where they will hold a voter registration drive. The Atheist Humanist Society of Connecticut and Rhode Island is sponsoring a blood drive at the Groton, Connecticut Library. The American Humanists Association offers a sample proclamation declaring May 3, 2012 as the National Day of Reason that people can print out and ask their City Councils to sign.