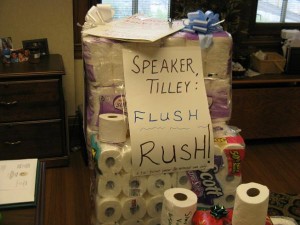 Media Matters for America is embarking on a long-term effort to further weaken bombastic radio talk show host Rush Limbaugh by peeling away advertisers from his show. The group bought $100,000 worth of radio air time to run two ads in eight major U.S. cities that already have active local campaigns to push Limbaugh off the air: Boston, Cedar Rapids, Chicago, Detroit, Macon (Georgia), Milwaukee, Seattle and St. Louis. The ads use recordings of Limbaugh making his repeated verbal attacks on Ms. Fluke to make their point.  After railing against law student Sandra Fluke by calling her a “slut” and  “prostitute” for her testimony before members of Congress about the necessity of funding contraception, Limbaugh made 46 additional personal attacks on her over the next three days.  Attacks against Limbaugh are continuing on other fronts, as well. The National Organization for Women (NOW) is also protesting Limbaugh. Members of the Missouri chapter of NOW sent hundreds of rolls of toilet paper to Missouri’s Speaker of the House, Steve Tilley (R), to encourage him to “flush Rush.” On March 5, Tilley made the decision to add Limbaugh to the Hall of Famous Missourians in the states’ capitol building. People inducted into the Hall are represented by sculpted busts displayed at the Capitol.  Numerous lawmakers have protested Limbaugh’s inclusion in the Hall, and sent letters to Tilley asking him to reconsider his decision. Currently the decision over who to include in the Hall is made solely by Missouri’s House Speaker, but Missouri Democrats are trying to change that so bipartisan approval will be required for future inductees.  In still another front in the assault on Limbaugh, the Los Angeles City Council voted 13-2 in favor of a resolution urging L.A. television and radio broadcasters to ensure on-air hosts do not use racist or sexist slurs over public airwaves. In addition to Limbaugh’s extended and particularly vile outburst, they were also prompted to issue the resolution after KFI radio hosts of the “John and Ken Show” — and L.A. talk show –referred to Whitney Houston as a “crack ho.” The show was pulled off the air briefly as a result.

Click here to hear one of Media Matters’ radio ads against Rush Limbaugh.