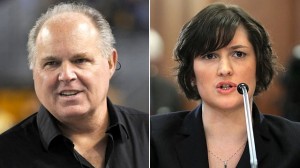 Advertisers are fleeing Rush Limbaugh’s show in droves after his over-the-top tirade of insults against third-year law student Sandra Fluke, who testified before Congressional Democrats last week in favor of making sure contraception remains available for women. After calling Fluke a “slut” and a “prostitute,” Limbaugh doubled down in his tirade last Thursday when he said, “So Miss Fluke, and the rest of you Feminazis, here’s the deal. If we are going to pay for your contraceptives, and thus pay for you to have sex, we want something for it. We want you post the videos online so we can all watch.” By Saturday morning, LegalZoom, Citrix Success, Quicken Loans, Sleep Train, Sleep Number Beds had all announced they were pulling their ads from Limbaugh’s radio show. Carbonite and ProFlowers are considering doing the same. Remaining advertisers LifeLock, LendingTree, TaxResolution and Sears, have not made any statements. A new website called “Boycott Rush” boasts it has gotten almost 50,000 supporters in under 24 hours, and a petition on UltraViolet to pressure ProFlowers to drop its advertising on Limbaugh’s show garnered 25,000 signers in a couple of hours.  A Twitter hashtag, #BoycottRush, is helping organize the effort to split off advertisers from Limbaugh’s show.  A similar grassroots campaign was successful in pushing Glenn Beck’s show off television after he made racially bigoted comments about Barack Obama.