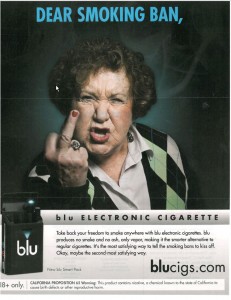 The maker of the “blu” brand of electronic cigarette is hoping smokers will respond to a particularly aggressive ad campaign that exploits their frustration and anger to sell more of their product. The ad’s  headline that says, “Dear Smoking Ban.” Beneath the headline is a photo of an angry older, middle-aged woman flipping her middle finger at the viewer. The ad text links smoking to freedom, a psychological construct long used by the tobacco industry to counteract the understanding that nicotine causes a powerful addiction that robs smokers of control over their tobacco use. The ad text says, “Take back your freedom to smoke anywhere with blu electronic cigarettes. blu produces no smoke and no ash, only vapor, making it the smarter alternative to regular cigarettes. It’s the most satisfying way to tell the smoking bans to kiss off. Okay, maybe the second most satisfying way.”  Electronic cigarettes contain nicotine, but since they don’t actually burn tobacco, they don’t contain as much of the hazardous byproducts of burned tobacco.