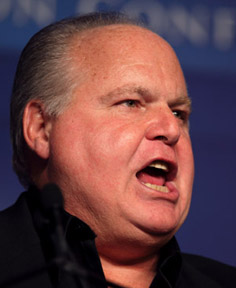 Anti-Rush Limbaugh activists racked up another successful week after six more businesses vowed to drop sponsorship of the Rush Limbaugh Show on KGVO Radio in Missoula, Montana. Their success brings the total to 13 businesses that have pulled their support of the show since April 13, 2012, when a grassroots effort to push Limbaugh off Missoula’s airwaves began. The current effort to kick Limbaugh off the air in Missoula started the day after citizens delivered a 1,600-signature petition KGVO Radio asking them to take Rush Limbaugh off the local air. The radio station refused to pull the show, and the next day, on April 13, activists unveiled a website, RushOutOfMissoula.com, that lists the show’s local and national sponsors, with each business’ contact information. Citizens began dialing the business owners to express their displeasure for the businesses’ support of Limbaugh and his persistent, hate-filled rhetoric. Dave Chrismon, organizer of the Missoula anti-Limbaugh effort, posted an upbeat email update in which he reported getting positive feedback from the community for the effort. “This is from an email,” Chrismon wrote, ” ‘I just wanted to inform you that as of today, we requested our ads not be run during the Rush Limbaugh Show. . . Thank you for letting us know that our ads were being run . . . The owner had no idea and was very upset when she found out.’ Shopping yesterday, I met someone who works at one of the past advertisers. She thanked me for the effort and told me, ‘We want to avoid controversy. After we pulled our ad, a longtime supporter called and thanked us on behalf of her daughter.'” Missoula activists aren’t letting up on their effort. Their current goal is to persuade a total of 20 advertisers to drop the show. They are also  thanking the businesses that have withdrawn their ads for “saying no to bullying.”