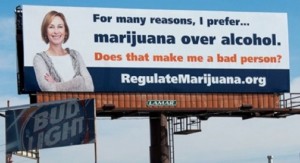 A big new billboard has appeared right over a liquor store near Mile High Stadium in Denver that shows a mainstream, straight-laced looking woman smiling with her harms folded, saying, “For many reasons, I prefer…marijuana over alcohol. Does that make me a bad person? RegulateMarijuana.org.” The board is the first in an educational campaign by backers of the Regulate Marijuana Like Alcohol Act, a measure that will appear on the state’s November election. The group backing the measure seeks to educate people about the ways that marijuana is safer than alcohol, specifically that it is less addictive than alcohol and tends to cause fewer adverse health effects. Users also cannot overdose on marijuana. The measure would permit limited possession and cultivation of marijuana by adults, and would let state and local governments in Colorado regulate the commercial production and distribution of marijuana or ban marijuana sales completely within their jurisdictions. On its website, the pro-legalization campaign says, “We are not suggesting that marijuana is better than alcohol … We are simply asserting that there are many good reasons to use marijuana instead of alcohol.”