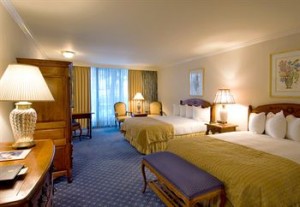 A room at the Little America Hotel in Salt Lake City

The American Legislative Exchange Council (ALEC) is reportedly pulling strings behind the scenes to shut down dissent at its annual meeting this summer. The Alliance for a Better Utah, a Utah progressive group, reports that after it reserved space at the Little America Hotel in Salt Lake City for July 25-28 — the same hotel and dates where ALEC will hold its 2012 annual meeting — the hotel called back and canceled the group’s reservation. The Alliance for a Better Utah says ALEC is using its political clout to get the hotel to refuse to rent rooms to other groups it doesn’t like during its annual conference. A hotel spokeswoman would not comment on the pulled reservation. ALEC has been under greater scrutiny since it was linked to the spread of “shoot first” laws like the one cited in the Trayvon Martin shooting in Florida. The good-government group Common Cause is seeking an investigation into the tax exempt status of ALEC, charging that ALEC is primarily a lobbying group and as such may be in violation of its tax exempt status.

2 comments for “ALEC is Using its Political Clout to Silence Dissent, Group Says”