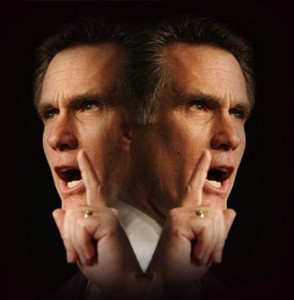 So what are people doing about Romney’s unapologetic, unabashed stream of lies, which he refuses to recognize or correct? A few in the second-tier media, like Maddow, Huffington Post, Daily Kos and Crooks and Liars.com have been working to draw more attention to it, and have been calling a spade a spade when it comes to things Mitt Romney says that are out-and-out lies. But few in the mainstream media have been directly calling out Romney on this count. The bigger, more mainstream news outlets tend to describe Romney’s lies with euphemisms like “untruths,” “conflicting remarks,” “gaffes” or “distortions.”

Daily Kos has a web page titled “ALL of Romney’s Lies in One Place,” maintained by Daily Kos member Yosef 52, who says, “I’m 60. I’ve been following politics since I was 12 …I vividly remember such world-class prevaricators as Richard Nixon. But for the life of me, I have never seen a more brazen liar than Romney running for president in my entire life. By God, I wont’ stand for it, not without a fight.”

Steve Benen of MSNBC has been chronicling Romney’s lies one by one, and is up to installment 21. Romney’s lying is also being followed by the website CrooksAndLiars.com. Jonathan Chait of New York Magazine wrote that Romney wanted to pursue a political career badly enough to engage in massive dishonesty, and that Romney sees that as his only way to get what he wants. “It’s Romney’s bad luck that fate has dictated his only path to the presidency lies in being a huge liar,” Chait wrote.

Perhaps the most stinging rebuke of all, though, comes from a blog titled “Romney Lies,” written by a member of the Church of Jesus Christ of Latter-Day Saints — the Mormon Church. In the “About” section of the website, the blogger, who remains anonymous, writes, “Mr. Romney is a gifted, capable leader who needs not stoop to deception to make a credible case for the Presidency. In fact, his lies have led me, a former supporter of his Senate and gubernatorial bids, to abandon my support for him.  I am certain I am not alone.” In a scathing, open letter to Mitt Romney, the author writes:

“I cannot reconcile your recent campaign rhetoric with the Church’s teachings on honesty and your own professed belief in the Church…Mr. Romney, you have a stark choice to make. You must either abandon your pretense of believing in the LDS Church’s teachings and continue to operate your campaign with the status quo of deceptive speech, or you must change your campaign and stop the lies. It is not only the American people who will judge you, but also, according to your professed beliefs, the almighty God.”

Can a person who claims to be pious while repeatedly violates his own religious tenets about lying really win the presidency? Can a person who, even more importantly, has so brashly violated the public trust by publicly telling so many lies, without apology or correction, actually win the presidency in this country? That remains to be seen. The results of the next general election will speak volumes to Americans, as well as to the world about American values.