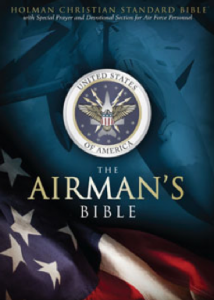 The Military Religious Freedom Foundation (MRFF) announced it has won a major battle to halt the publication of Bibles bearing official U.S. armed forces emblems on the covers. The bibles were published by Holman Bible Publishers, the publishing arm of the Southern Baptist Convention. The Bibles also contained a fake quote from George Washington that was created by excerpting a paragraph of Washington’s 1783 letter to the governors of the states at the end of the Revolutionary War and altering it to make it into a prayer in the name of Jesus Christ. Almost 2,000 servicemembers contacted MRFF to complain that the bibles were being featured on the shelves of military exchanges and in stores around the world. The bibles made it look like the Bible was endorsed by the U.S. military and was the official religious text of the U.S. military services. MRFF says that over the past few years, it has received more complaints from servicemembers about these bibles than any other single separation of church and state issue it has dealt with. MRFF says the bibles were a “clear violation of the U.S. Constitution” because they used U.S. armed forces logos to promote a specific religious text. Responding to pressure by MRFF over the inappropriateness of the bibles, all four branches of the U.S. Military revoked their approval of the Military series of Holman Christian Standard Bibles, blocking further use of their emblems on the texts.