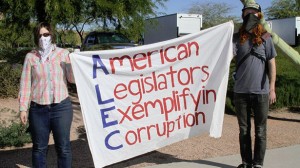 Johnson & Johnson announced it is ending its membership in the American Legislative Exchange Council (ALEC), the embattled right-wing bill mill charged with spreading “shoot first” laws like the one that drew attention in the killing earlier this year of unarmed Florida teen Trayvon Martin. J&J is the 19th company to flee ALEC, and held a seat on ALEC’s “Private Enterprise Board.” The company made the announcement after a petition and phone campaign by People for the American Way Foundation, the Color of Change and other groups gathered more than half a million signatures asking corporations to end their support of ALEC’s agenda.  ALEC has been a driving force behind the spread of voter suppression laws across the country, like the law that led to the purge of legitimate voters from Florida’s voter rolls.  The U.S. Department of Justice filed a formal lawsuit against Florida today to stop the purge. J&J issued a statement saying it did not “condone legislative proposals that could serve, even inadvertently, to limit the rights or impact the safety of any individual,” and that it worked with ALEC only on “matters that help create a climate that supports jobs and innovation in the U.S.” Other companies and organizations that have dropped their ALEC memberships include Coca-Cola, Pepsico, Kraft, Wendy’s, Wal-Mart, Procter & Gamble, Yum! Brands, the Bill and Melinda Gates Foundation, Intuit, Mars, Inc., Arizona Public Service, and Kaplan.