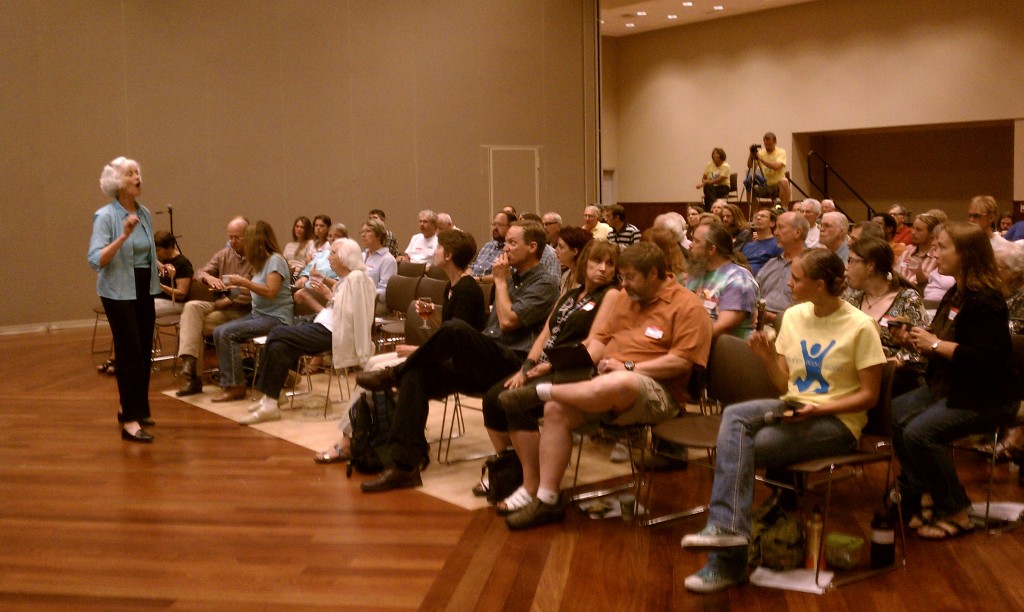 Attendees listen to a talk about the Patriot Act at the first annual Colorado Secular Conference held at Colorado Mesa University in Grand Junction.

Colorado’s first annual Secular Conference kicked off today in one of the most conservative and deeply religious areas of the state: Grand Junction. Mesa County, where the conference was held, is the second most conservative county in the state, after El Paso County (Colorado Springs), home of Focus on the Family and the Air Force Academy, with its iconic Cadet Chapel. About 120 people from around Colorado and many other states spent the day in the second floor ballroom of Colorado Mesa University’s Student Center discussing the future of the secular movement in Colorado and the U.S. The conference opened with a discussion involving the entire group about the goals secular citizens hope to accomplish by organizing and becoming a political force in Colorado. Attendees shared stories about the discrimination and stigma they have suffered as a result of their lack of religiosity. Several speakers pointed out that non-religious citizens now comprise fully 19 percent of the U.S. population, yet have little to no representation in government or policy matters. Kelly Damerow, Research and Advocacy Manager for the Secular Coalition for America, who traveled to the conference from Washington, D.C., discussed the threats that ongoing religious extremism pose, like attempts to restrict the types of health care that can legally be delivered, loopholes exempting religious people from having to comply with laws and regulations that govern the rest of society, and efforts to enact “personhood” amendments that elevate the rights of fetuses over the rights of the women carrying them. A new statewide secular lobbying group, the Colorado Secular Coalition, was officially created at the meeting, bringing a resounding round of applause from attendees. A speaker from the American Civil Liberties Union enlightened the crowd about how the 12 year-old Patriot Act has eroded citizens’ Fourth Amendment rights to be free from unreasonable search and seizure. Afternoon speakers gave attendees tips for creating new secular groups in their schools and hometowns. The conference will conclude tomorrow, on Sunday, after more talks, a tour of the Colorado National Monument and western Colorado’s wine country. The conference was organized by Humanists Doing Good, a secular group in Fruita, Colorado, a town of about 13,000 people located ten miles west of Grand Junction. The conference was free to all attendees, and will be an annual event.