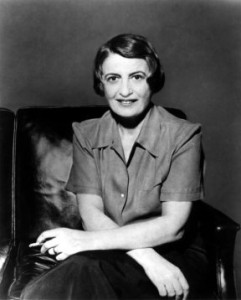 Rush Limbaugh called her “brilliant.”  The Tea Party made a movie about her. Ron Paul says she “tells the truth” and GOP vice presidential pick, Rep. Paul Ryan once said that “more than anyone else, she explained the morality of capitalism and the morality of individualism” to him and inspired him to run for office. The woman about whom all these hard right wingers gush is Russian immigrant Ayn Rand, a political philosopher and novelist whose books and writings promote objectivism, a philosophy that holds that people should elevate their own self-benefit over all else. Rand believed that the there is no obligation whatsoever to care for your fellow man, and that the only real moral imperative is pursuit of your own happiness and self-interest, even at a high cost to others. Rand believed that people should be unconcerned with those who are less fortunate. But the politicians and right wingers who extoll the virtues of Rand and he extraordinarily hard individualist philosophy also ignore the fact that she was an atheist who scorned churches and the concept of God. “I am against God,” she once  stated. “I don’t approve of religion. It is a sign of psychological weakness…I regard it as evil.” Some even regarded Rand as a psychopath after she praised serial murderer William Edward Hickman as her ideal man and a “superman” who exemplified her philosophy of ultimate self-centeredness. In 1927, Hickman kidnapped and gruesomely dismembered a 12-year-old girl named Marion Parker, returning her torso to her parents with her eyes wired open after he extorted $1,500 in ransom from the child’s father.