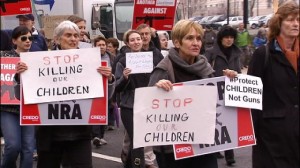 The National Rifle Association has gone dark, shutting down its Facebook page, going silent on Twitter and staying silent on it’s blog as it hunkers down in face of anti-gun protesters marching on its Washington, D.C. headquarters in the wake of the Sandy Hook Elementary School massacre.  WalMart, one of the world’s largest sellers of both guns and kids’ toys, announced it is pulling Bushmaster rifles off its shelves nationwide. And another large gun seller, Dick’s Sporting Goods, tastefully removed all guns from view at its store closest to Newtown, Connecticut, where the mass killing took place last Friday, and announced it will stop selling “modern sporting rifles” at stores nationwide. The California state treasurer is considering purging the state’s pension investment funds of stock in companies that manufacture guns, and Cerberus Capital Management, a big investment firm, divested itself of holdings in Freedom Group, which makes  Bushmaster rifles like the one the shooter used at Sandy Hook. The California State Teachers’ Retirement Fund is also looking to divest itself of funds invested in Freedom Group. Meanwhile, online petitions demanding legislators move quickly to better regulate guns and gun purchases are gathering signatures at phenomenal rates. One petition we’ve been following on SignOn.org — the biggest one so far — continues to gather hundreds of signatures every hour and is currently up to almost 380,000 signors. Another petition on the White House’s “We the People” petition website that sprang up demanding the Obama administration take immediate action to limit access to guns has gathered 184,202 signatures. It needed just 25,000 signatures to get serious consideration by the Obama administration.