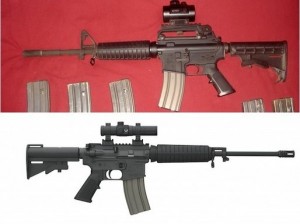 A Bushmaster .233 semiautomatic rifle, the kind that was used to slaughter 20 children in Newtown, CT. The National Rifle Association has campaigned to keep the gun legal.

In almost the blink of an eye, an online petition demanding sensible federal-level gun safety laws has gathered more than 230,000 signatures, and is continuing to gather signatures at a rate of almost 2,000 per hour. The response to the petition was so overwhelming that shortly after starting it, the woman who began the petition changed the goal for the number of signers to 250,000. The petition’s impetus was the December 14 bloodbath at Sandy Hook Elementary School in Newtown, Connecticut in which a 20 year-old gunman entered the school and slaughtered 20 six and seven year old pupils and six adult employees who tried to save the children. The petition seeks closure of gun show loopholes that allow people to buy guns without background checks, an end to the online sale of ammunition, mandatory waiting periods for gun purchases during which thorough background checks are conducted, and mandatory psychological and medical evaluations prior to making gun purchases. The petition also requests that character references be provided and evaluated out prior to gun purchases. More accountability should be placed in the hands of retailers, the petition says. When patrons refuse wait periods, authorities should be notified. Gun handling training and testing should be mandatory, as should a renewal process that includes many of the above-mentioned evaluation terms. “Our second amendment rights are long overdue a reevaluation. How many more senseless and entirely PREVENTABLE shootings have to occur before we do something about Gun Control,” asks Staci Sarkin, the petition’s creator.  The petition will be send to the House of Representatives. “As a citizen and constituent of this great country, I am asking that you take a firm stand and make a positive change by restricting access to guns and saving lives,” Sarkin’s petition states. Sign the petition here.