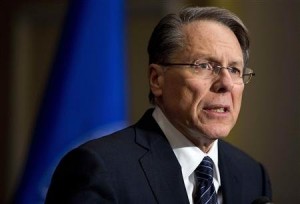 National Rifle Association Executive Vice President Wayne LaPierre gave an instructive lesson in PR techniques during his talk last Friday about NRA recommendations to prevent further machine-gun massacres of innocent people. LaPierre completely dodged the central safety issues on everyones’ mind — the rise of public massacres and massive numbers of gun deaths in the U.S., — and instead switched the subject to video games, a lack of armed guards in schools and other topics well-removed from the central issues at hand. In so doing, La Pierre applied the classic PR playbook techniques of changing the focus and broadening the issue. It goes like this: If you can’t wage a successful battle on the issue you currently face, then change the issue to one you think you can win more easily.

PR techniques like this were first used to great effect by tobacco industry, which provided a model for other industries to follow. Back in the 1990s, when the EPA labeled secondhand smoke a Group A Known Human Carcinogen that kills 3,000 people a year, the cigarette industry reacted by redirecting public concern at great cost onto entirely new, previously-unknown issue called “sick building syndrome,” that focused on poor building ventilation and the supposed off-gassing of new carpet, drywall and other building materials. Thus it was no longer secondhand smoke that was making people sick in their homes and workplaces, it was bad construction materials and poor air circulation. Proposals to ban smoking in restaurants and bars were portrayed as threats against private property rights. Cigarette taxes became issues of fairness and effective tax policy, cigarette marketing became an issue of freedom of commercial speech, cigarette-related fires become an issue of fire safety programs, and so on.

Changing the focus of the debate to topics other than human health won cigarette makers decades more time in their their battle against government regulation — a delay that allowed their products to kill millions more people worldwide while government dragged its feet. Now the gun industry, through LaPierre, is attempting to do the same thing, while lives hang in the balance.

Think of it like this: If your six year old was having a tantrum, grabbed a broomstick and smashed all the dishes on your shelves, your first reaction would be to take the broomstick away and assure he couldn’t get his hands on it in the future. It’s pure, simple human logic, and the same way people are now reacting to guns in the hands of deranged people. They are taking steps to rid society of the most dangerous guns and make it harder for deranged people to get their hands on those that remain. It makes perfect sense, and is the correct course of action. But according to Wayne LaPierre, we shouldn’t follow sane, simple, human logic when it comes to the product HE represents.

The difference now is that the switch-the-focus technique LaPierre tried to use last Friday fell completely flat. The unique circumstances posed by the Sandy Hook massacre exposed it for what it was — a grotesque, inappropriate attempt to protect his paymasters from a mass uprising of common sense among American citizens who are now seeing much more clearly where the NRA and destructive conservative policies have led this country.

Now, at long last, people may finally be able to recognize this PR technique and avoid falling for it any more. My hope is that people have turned a corner in this country and can now see damaging corporate-backed PR techniques and where they have led us.