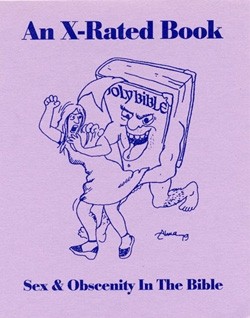 The book secularists plan to give away at Orange County, Florida high schools when they get their date to distribute literature from the school district

An Orange County, Florida school district allowed the Christian group World Changers of Central Florida to distribute Bibles to high school students at eleven area high schools on January 16, 2012, by placing the books on tables near the school’s lunchroom. Orange County secularists who were offended by the overt advertisement for Christianity on public school grounds has asked the school district to change its policy to disallow distribution of religious materials on school grounds. If the school district refuses to change the policy, members of American Atheists and Central Florida Freethought Community say they will ask the school district for a date on which they can distribute information to students about atheism and humanism in the same manner.  World Changers’ mission is to promote prayer in public schools and push to have creationism taught in public schools. World Changers tried to conduct a similar Bible giveaway in Collier County, Florida, in 2010, but were denied the event after the school district decided that giving away religious literature on school grounds crossed the line of separation between religion and government.  World Changers sought help from Liberty Counsel, a Christian litigation group, which filed a lawsuit against the Collier County school district, arguing that the school district was infringing on World Changers’ First Amendment rights to free speech and religious freedom. Liberty Counsel also argued that the separation of church and state didn’t apply in this case because the school board wouldn’t be giving away the bibles, but rather a private community group. A Collier County court ruled that World Changers could go ahead with the book giveaway as long as the group only engaged in “passive distribution” of the Bibles, that is, as long as they only leave the books unattended on tables, and as long as people were only present to replenish the stock of Bibles on the tables.  Florida secular groups say that when they get their date to conduct their book giveaway, they plan offer students books titled “Sex and Obscenity in the Bible,” fliers about “Ten Common Myths About Atheists,” and popular works by famous atheists Dan Barker and Madalyn Murray O’Hair.