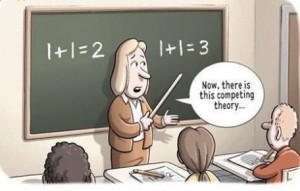 The National Center for Science Education is warning that a bill introduced in the Colorado House of Representatives on January 16,  HB13-1089 (pdf), called the “Academic Freedom Act,” is really a trojan horse anti-science bill. The bill directs teachers “to create an environment that encourages students to intelligently and respectfully explore scientific questions and learn about scientific evidence related to biological and chemical evolution, global warming, and human cloning.” It sounds innocent enough, but such bills use an “academic freedom” guise to tacitly permit teachers to misinform students by allowing the teaching of creationism as a scientifically valid alternative to evolution, or by allowing teachers to misrepresent evolution as being scientifically controversial. The last time such an anti-evolution bill was introduced in Colorado was in 1972, when a lawmakers tried to put a measure on the ballot that would have allowed “all students and teachers academic freedom of choice as to which of these two theories, creation of evolution, they wish to choose.” That measure never made it onto the ballot. All of the primary sponsors and co-sponsors of Colorado’s 2013 “Academic Freedom Act” in both the House and the Senate are Republicans. These tricky, shifting strategies state and local school boards, state legislatures and teachers are using to undermine the teaching of scientific subjects like evolution, climate change and cloning are described in depth an article published in a September, 2010 article in the Annual Review of Genomics and Human Genetics titled Dispatches from the Evolution Wars: Shifting Tactics and Expanding Battlefields.

Bills Written by a Non-Legislative Third-Party

Bills strikingly similar to Colorado’s “Academic Freedom” bill have been introduced into other states as well in 2011 and 2012, most notably Missouri and Oklahoma, which contain the exact same wording as Colorado’s bill, indicating these bills are really being crafted by a non-legislative third party source.  The source of the wording is the Discovery Institute, a conservative think tank that lobbies to include creationism in the form of “intelligent design” theory in public school science curricula as a way to cast doubt on the theory of evolution.

On its website, the Discovery Institute very clearly warns about the dangers of including Darwinian theories and secular scientific ideas in school curricula:

“Scientific research and experimentation have produced staggering advances in our knowledge about the natural world, but they have also led to increasing abuse of science as the so-called “new atheists” have enlisted science to promote a materialistic worldview, to deny human freedom and dignity and to smother free inquiry. Our Center for Science and Culture works to defend free inquiry. It also seeks to counter the materialistic interpretation of science by demonstrating that life and the universe are the products of intelligent design and by challenging the materialistic conception of a self-existent, self-organizing universe and the Darwinian view that life developed through a blind and purposeless process.”

“A bill (SB561) named the “Louisiana Academic Freedom Act,” was pre-filed on March 21, 2008, in the Louisiana Senate by the Education Committee chair, Ben Nevers, a Bogalusa Democrat, had the same names as the Florida, Alabama and Discovery Institute bills, the Louisiana version was modeled on a policy adopted in 2006 by the Ouachita Parish School Board with the backing of the pro-creationism Louisiana Family Forum (LFF). The bill contends that ‘the teaching of some scientific subjects, such as biological evolution, the chemical origins of life, global warming, and human cloning, can cause controversy, and that some teachers may be unsure of the expectations concerning how they should present information on such subjects,’ and extends permission to Louisiana’s teachers to ‘help students understand, analyze, critique, and review in an objective manner the scientific strengths and scientific weaknesses of existing scientific theories pertinent to the course being taught.'”

“The General Assembly further finds that the teaching of some scientific subjects, such as biological evolution, the chemical origins of life, global warming, and human cloning, can cause controversy and that some teachers may be unsure of toward this end, public school authorities and administrators must permit teachers to help students understand, analyze, critique and review in an objective manner the scientific strengths and scientific weaknesses of existing scientific theories covered in a given course.”

State legislation that is written by non-legislative players who then hand it to legislators to introduce into the states is the same methodology used by the American Legislative Exchange Council (ALEC), a corporate-funded, conservative bill mill that works to craft and introduce bills friendly to business.