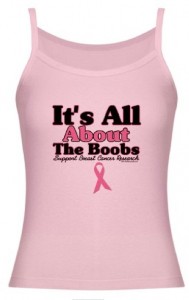 Breast Cancer Awareness month comes around every October, a now-familiar time when pink ribbons adorn department stores, grocery stores, gas stations, shopping malls and many other places. But this particular big “awareness” push may have reached its peak and maxed out its usefulness. By now most everyone is aware of breasts and breast cancer, but ignorance still abounds in other cancer areas. For example, people are still woefully unaware that lung cancer kills twice as many women each year than breast cancer.  More women every year in the U.S. die from lung cancer than from breast, uterine, and ovarian cancers combined. In 2009 alone, 31,000 more women died of lung cancer than breast cancer. So why aren’t there aren’t any ribbons, rubber bracelets, theme-colored products, corporate promotions, colored car magnets, festivals or fundraisers to make people aware of lung cancer’s devastating toll, or to support lung cancer victims or raise money for a cure?

Because lungs just aren’t as effective as selling crap for marketers, that’s why.

Female breasts are sexy, and sex sells, plain and simple. Lungs and other organs and their cancers just don’t have the same sexual zing to them. Lung cancer may be the country’s number one cancer killer, but people are unlikely to flock to buy weird and inappropriate “lung cancer awareness” products, like a brightly-colored “lung cancer awareness” hand gun, a “colon-cancer awareness” floating beer pong table or a bile-colored “pancreatic awareness” toaster. Lungs, pancreases, colons, prostates and other hard-working internal organs are just unattractive marketing tools — they don’t sell stuff.  They are hidden away inside and asexual, and we like them that way. Not so with breasts. Female breasts are always right out there, and they conjure up buying power like few other organs. The “breast cancer awareness” theme gives corporate America a legitimate “in” to link female breasts to the sale of just about anything — a winning combination for marketing purposes. Now that marketers have seized upon the marketing power of the female breast, they are unlikely to ever let go.

People also tend to blame lung cancer victims for their own disease, since it is widely known that smoking causes lung cancer. Pay no attention to the fact that cigarette companies engaged in 50 years of fraud and deception in advertising their products, or that they magnify the addictiveness of cigarettes through chemical manipulation like free-basing nicotine, or that they perform all manner of other hidden chemical hanky-panky with tobacco that they never told their consumers about. It’s all the smoker’s fault for getting cancer.

Talk about a need for awareness! Breast cancer awareness campaigns are inevitably silent about the fact that breast cancer also affects men. Men are at a diagnostic disadvantage for the disease because they are not urged to conduct self-exams or get screening mammograms the way women regularly are. Men’s ignorance about male breast cancer leads to long delays in diagnosis, which reduces men’s survival rate. Since the public is repeatedly told that breast cancer is a woman’s disease, men have difficulty accepting the diagnosis when they are affected, even to the point of keeping their diagnoses secret out of shame. Male breast cancer victims also face a terrible stigma from society. One public health clinic refused to give a man a mammogram because he was a man. My former neighbor, whose whose husband died of breast cancer, told me that after he was diagnosed, her husband’s own friends jokingly derided him for having gotten a “woman’s disease.” I only found out about male breast cancer from her, because the information that men are also affected by breast cancer is summarily excluded from ubiquitous “breast cancer awareness” campaigns.

Clearly, “breast cancer awareness” promotions as they are now, with their over-the-top emphasis on women’s breasts, do more harm than good when it comes to men.

So It’s All About Women’s You-Know-Whats (Snicker!) 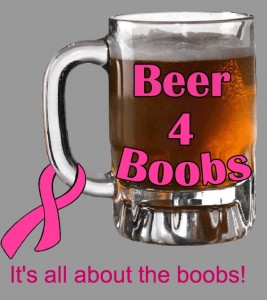 These days, many breast cancer promotions have cringeworthy, degrading overtones that convey all the respect of drunken sailors at a strip club. A southern California company called “Save the Ta Tas” (phone 1-877-MY-TATAS), sells T-shirts with embarrassing slogans like “Caught you lookin’ at my Ta Tas” and “I love my big Ta Tas.” The company donates a small portion of sales from these items for research. A television commercial shows a woman wearing a skimpy bikini walking next to a swimming pool. Men gawk at her chest. The camera zooms in to focus on her jiggling breasts and a message fills the screen, “You know you like them. Now it’s time to save the boobs.” The ad invites viewers to attend an event called “The Boobyball Party.” Hard Rock Hotels advertise “Get into Bed for a Cure.” There’s even a horrifyingly-named “Beat the Hell Out of Breast Cancer” festival in Bryan, Texas, which offers promotional bracelets that say, “I Love Boobies.” Flanigan’s Boathouse in Malvern, Pennsylvania offers a happy hour called “Tips for Tits.”

Alcohol manufacturers have started offending breast cancer survivors by using female breast cancer to sell liquor. California’s Marin Brewing Company sponsors a “BreastFest.” The Russian River Brewing Company in Santa Rosa, California has “All Hopped Up for the Cure,” and Sweetwater Brewery in Atlanta minces no words with its ““Beer for Boobs” festival, promoted with the snickering tag line, “It’s all about the boobs!” A Delta Airlines October in-flight magazine asked readers to “join Delta in the fight against breast cancer” by purchasing a pink martini made with Skyy Vodka and Minute Maid Pink Lemonade for $7. The Chambord liquor company urged people to “pink your drink”, saying that “by adding a splash of Chambord to any cocktail, you’re supporting breast cancer awareness year-round.”

Liquor companies persist in linking their products to breast cancer awareness even though the National Cancer Institute warns that “even moderate drinking has been shown to increase the risk of breast cancer,” and the American Cancer Society says “The use of alcohol is clearly linked to an increased risk of developing breast cancer.”

Barbara Brenner, Executive Director of Breast Cancer Action, sums it up by saying, “Anybody trying to sell alcohol to promote breast cancer awareness should be ashamed of themselves.”

When October comes around, we are inundated with mindless, embarrassing, even harmful and degrading pink cause marketing promotions. October, then, would be a good time to urge consumers to look critically at marketing campaigns that persuade us to buy products by leveraging fear generated by a deadly disease, or employing sexual overtones to sell products. At the very first sign of pink, consumers need to start asking critical questions like “Is the product being sold actually good for us?” “Is the promotion appropriate?,” “How would a breast cancer victim — male or female feel toward this promotion? Would they consider it offensive?” and “Would I do more good if I donated money directly to a reputable disease research organization instead of spending it on this product?”

Chances are the answers to those questions will help consumers see that they’ve been taken for a ride on an often inappropriate and sometimes offensive rising tide of corporate pink.