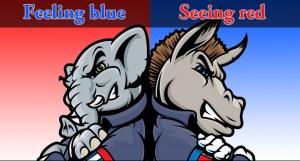 American politicians know amazingly little about their constituents’ viewpoints, and tend to believe their constituents are far more conservative than they really are. Political scientists at two major universities surveyed nearly 2,000 candidates for statewide legislative office across the U.S. and uncovered a vast disconnect between what candidates’ believe on political issues, and what constituents in their districts actually believe. The researchers, David E. Broockman of the Department of Political Science at the University of California, Berkeley and Christopher Skovron of the Department of Political Science, University of Michigan, compared legislative candidates’ perceptions of mass opinion in their districts on issues like same-sex marriage, universal health care and funding of government programs with actual district-level opinion.  They found that politicians are generally fairly wrong about their constituents’ views. Both liberals and conservatives overestimated how conservative their constituents are, but conservatives’ perceptions were exceptionally distorted.  Conservative politicians overestimated the conservatism of people in their district by more than 20 percentage points. The study authors write, “For perspective, 20 percentage points is roughly the difference in partisanship between California and Alabama.” Liberal politicians also overestimated the levels of conservatism in their districts. Broockman and Skovrons found that about 70% of liberal ofﬁceholders underestimated their constituents’ support for liberal positions on these issues. This disconnect between conservative beliefs and the reality of political feeling in the U.S. has been demonstrated by some of the most prominent U.S. politicians. For example, Richard Nixon believed a “silent majority” of Americans backed his policies towards the Vietnam War and more recently during the 2008 presidential campaign, Sarah Palin widely stated her belief that the “real America” supported her and John McCain’s Presidential ticket. Remarks like these suggest that American conservative politicians have what is essentially a “folk theory” the American public is far more conservative than it really is. The researchers used a dataset that accurately described the political views of nearly 100,000 Americans, and also were able to estimate actual district- and issue-speciﬁc opinion in  candidates’ districts with a great deal of precision. Researchers conducted the survey in August, 2012, prior to the November general election. The results of the study have major ramifications for American democracy and constituents’ ability to obtain fair and accurate political representation. The researchers found that, because of the biased beliefs of so  many candidates as well as officeholders, liberal constituencies only can only get representation if they collectively make their views “nothing short of unambiguous.”,