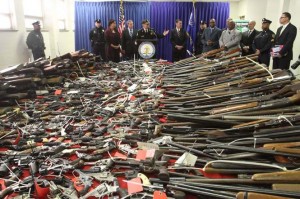 Laws to regulate guns just don’t work. At least that’s what many prominent Republicans say.  In the mean time, the U.S. is awash in guns, judging from the piles of them turned in at buyback programs across the country. While it is unclear whether these programs actually reduce gun deaths, they do prove one thing: Americans have more guns than they know what to do with. Add to this emerging technology that, when gun nuts perfect it, will allow people to manufacture guns using 3-D printers, and we may be so deep in trouble we’ll never dig out. This distribution method will make it completely impossible for government to regulate who gets a gun and who doesn’t. Gun owners and pro-gun legislators repeatedly tout the portion of the Second Amendment that talks about their right to bear arms, but universally ignore the part indicating gun owners are expected to be part of a “well-regulated militia.” All these factors point to one conclusion: the time may  have already passed when we could realistically regulate guns to any desired effect.

There is a proactive alternative to regulating guns: strictly regulate ammunition. After all, guns without bullets are only as dangerous as rocks or baseball bats.  The Second Amendment doesn’t mention bullets, so the production, distribution and sale of ammunition are wide open to regulation. No gun owners have ever challenged anyone to try and pry the bullets from his (or her) cold, dead hands, and gun owners could continue to own as many guns as they like.  With strict limits on the availability and manufacture of ammunition, society won’t have to worry about having only the pitiful alternative of being able to pouncing on a violent shooter in the tiny window of time when they are forced to reload. Hunters can be allowed a small number of bullets to hunt, and if they don’t hit their mark with the bullets they have, game’s up and it’s time to go home…more of a challenge for real hunters.

Regulating ammunition is a completely viable alternative for achieving gun safety across the U.S., and some people have already figured this out. The District of Columbia, Illinois, Massachusetts and New Jersey already have laws requiring a license to buy ammunition, and now California legislators have introduced several bills to regulate ammunition in different ways. One requires a background check and a $50 annual permit to buy ammunition. Another would require all ammo dealers to be licensed and provide their identification information to a state registry. Other proposals include taxing ammunition to help pay for emergency services or fund crime prevention. In the U.S. Congress, Senator Frank Lautenberg (D-New Jersey) introduced a bill that would require face-to-face purchases of ammunition, effectively prohibiting internet sales, and require ammo dealers be licensed and report all bulk purchases of ammunition. Rep. Caroyln McCarthy, (D-New York), who herself has lost a loved one to gun violence, introduced a bill similar to Lautenberg’s in the House. Yet another federal bill, the Ammunition Background Check Act of 2013, introduced by Sen. Richard Blumenthal (D-Connecticut), would require sellers to track their inventory and keep records of their customers. Gun sellers would also have to report any purchases of 1,000 rounds or more of ammunition, or any thefts of large amounts of ammunition. These are all good ideas, but they could go further. Perhaps incentives could be provided to ammunition dealers to sell less of the stuff rather than more, or require purchasers to show proof that they know how to properly handle and transport a gun, and have had training in first aid for gunshot wounds. Manufacturers could also be regulated as to quantity they are allowed to sell, thus driving up the price of ammunition, which would make it less available in general, and limits could be placed on who they sell it to. It might also be more difficult to manufacture bullets in any real quantity (or of any real quality)  on a 3-D printer. The area of regulating ammunition is wide open to innovative legislation. The end goal could be the eventual phase-out of the widespread availability of ammunition.

Right now, federal law is lax with regard to purchases of ammunition. It can’t be sold to mentally defective or underage people, for example, or to fugitives or drug addicts or people who are under a restraining order. These are all sensible rules, but don’t go far enough to make the general public safer. The best actions to prevent gun violence would be proactive, that is, they would prevent death and injury from firearms before they occur.  Since the GOP insists regulating guns doesn’t work, it may be time to forget about regulating guns and instead clamp down fast and hard on the all-to-easy availability of ammunition.