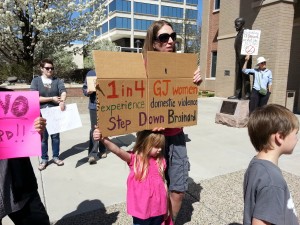 A woman attends the rally at Grand Junction City Hall to protest Richard Brainard taking office. Brainard has admitted he struck his live-in girlfriend to get her to “shut her mouth.”

About 100 citizens of Grand Junction, Colorado rallied outside City Hall today to protest city councilman-elect Richard Brainard’s stated intent to assume office in early May. Linda Moran of the Latimer House organized the rally. Latimer House provides shelter for battered women. Brainard was arrested last weekend after admitting to police that he struck his live-in girlfriend. City Councilman Jim Doody  spoke at the rally, saying Mr. Brainard had already highly embarrassed the city and that citizens are rightly concerned about Brainard’s behavior. Doody announced  that he and fellow councilmember Bennett Boeschenstein plan to write a letter, which they will submit to the rest of Council, asking Brainard not to assume office. The crowd cheered and applauded. Doody warned, however, that Brainard, who has been duly elected, could assume office if he wanted to. Several citizens who spoke said they had voted for Brainard and were now sorry they had. One woman, with three children in tow, said the first thing she teaches her children is not to hit other people, ever. Brainard initially lied to the police after they arrived at his residence early Saturday morning, and denied a physical altercation with his girlfriend. He later admitted to grabbing, pushing and slapping her. A non-redacted version of the police report says “Rick stated that he slapped (girlfriend) because she needed to ‘shut her mouth,” saying she said something so offensive to him “that he had to slap her.” It was also announced at today’s rally that a group of state-approved domestic violence treatment providers from across the western slope have issued a statement  asking Brainard not to take office. Brainard’s next court appearance is May 6, the same day he is scheduled to be sworn into office. Brainard’s lawyer has asked the court to waive the requirement that Brainard attend his court status conference May 6, as well as all future hearings, due to conflicts with his “employment.”