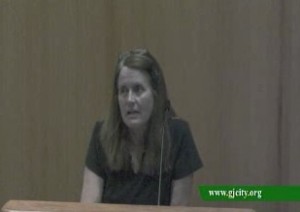 At the Wednesday, May 22 Grand Junction City Council meeting, citizens took advantage of the public comment period to speak out about their feelings about Rick Brainard sitting on Council. Brainard pled guilty in Mesa County Court May 17 to a charge of third degree assault for hitting his live-in girlfriend in the face hard enough to cause a black eye and facial bruising. The assault took place just days after he was elected to the Grand Junction City Council. The Grand Junction Chamber of Commerce backed Brainard as a candidate, and has continued to support him despite the assault, angering citizens. John Williams, an artist and author who lives in the 7th Street historic district and writes about Grand Junction, spoke to Council and said his family has lived in Grand Junction for 50 years, and he knows a lot of people in town. Williams said many citizens are upset about Rick Brainard’s presence on Council and have called for him to step down. “You’ve heard a lot of people in town,” Williams said. Citing Mr. Brainard’s guilty plea in court, he spoke directly to Mr. Brainard told him he “should be a man and step down” from Council. Mare Charlesworth spoke next, saying she was speaking from compassion and from the heart. “I’ve been included in a group that’s been called an uneducated, uninformed, angry lynch mob, when in fact we’re mom, dads, grandmas and grandpas. The majority of us are educated, with bachelors degrees and higher. As far as being angry, I will speak for myself, I have a right to be angry,” said Ms. Charlesworth, who added that she is a “survivor” (of domestic violence.)  “I was in the courtroom the day you were sentenced, Rick,” Ms. Charlesworth said. She told Mr. Brainard that his attorney that day “blamed everyone but you. You were described as as a 51 year old man, unemployed, vilified, kicked off boards. Whose fault is that? It’s not ours. It’s yours,” she said.  “And when you were given an opportunity to be an man and accept responsibility, instead your reply was simply ‘I did something I shouldn’t have.’ ” …a very far stretch from leaving a mark on a  a mark on a woman’s face that went past her jawline.” Ms. Charlesworth told Mr. Brainard, “You could have avoided all the vilification if you had been a man, stepped up to the plate and stepped down” from City Council.  “I’m going to keep coming to every [council] meeting and talking to you because I take it personally, she said.  “The fact that [Mr. Brainard] is sitting in that seat is an insult to our community, a city that I love…I work on Main Street. We pulled our business out of the [Grand Junction Area Chamber of Commerce] because of Rick Brainard.” Ms. Charlesworth said Main Street business owners talk to each other, and the feeling is unanimous among Main Street business owners that Mr. Brainard should step down. Under the Grand Junction City Charter, a council member must be convicted of a felony to be forced off Council. Mr. Brainard’s assault was a misdemeanor.

Video of the meeting is available at this link: http://gjcity.granicus.com/MediaPlayer.php?view_id=4&clip_id=793. You can skip right to the Citizen Comments.