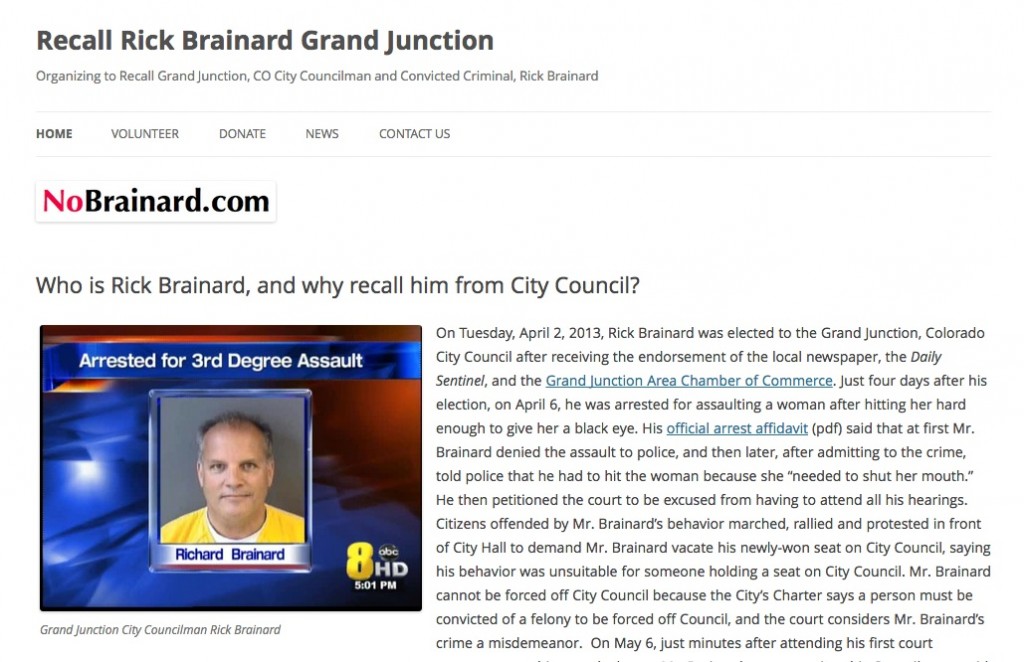 Grand Junction citizens organizing to recall newly-elected City Councilman Rick Brainard have created a new website, NoBrainard.com, where the public can go to donate money to the recall effort, volunteer to circulate petitions, help gather signatures, find out where to go to sign a petition, download free recall promotional posters and volunteer to help in other ways. The site tells the story of Rick Brainard, an aviation company executive who was elected to City Council April 6, 2013, and just four days later was arrested for assault after beating up his live-in girlfriend badly enough to give her a black eye. At first he denied the assault to police, then Brainard confessed, telling police (pdf) he had to do it to get her “to shut her mouth.” Brainard’s bad behavior and subsequent guilty plea has horrified citizens, and his dogged refusal to step down from his Council seat despite months of pressure will force the City to spend $45,000 – $50,000 of taxpayer money on a recall election and force citizens to collect enough valid signatures to recall him. Brainard is pushing the campaign to this point even though he ran as a fiscal conservative. The recall site compiles a list of news articles detailing the continuing saga of Mr. Brainard and the progress of the recall, and lists the dates, times and locations of training sessions for petition circulators. Recall organizers say if Mr. Brainard voluntarily steps down from his council seat prior to the signature collection drive, they will donate all funds raised for the recall effort to victims of domestic violence.