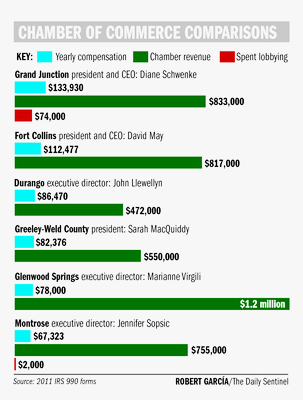 The Grand Junction, Colorado Daily Sentinel on July 21 published a scathing expose’ of the Grand Junction Area Chamber of Commerce’s recent activities that have citizens in an uproar.  The Chamber, once seen locally as a respected and helpful institution, in recent years has started engaging in hard-core political activity, and spending plenty on it. In 2011, the G.J. Chamber spent a whopping $74,000 of members’ money on lobbying expense. The next closest comparable Colorado Chamber of Commerce that spent anything at all on lobbying was the Montrose Chamber, which spent just $2,000. The Sentinel also revealed that G.J. Chamber president Diane Schwenke’s compensation far exceeds that of her counterparts at comparable Colorado chambers. In 2011, Schwenke made $133,930 in salary and benefits. Her next closest counterpart made just $112,477. Most of the other presidents of comparable chambers made well under $100,000/year in combined salary and benefits. The G.J. Chamber’s headlong dive into hyper-political activity has led to a backlash among citizens, who have started boycotting Chamber-member businesses. In many citizens’ eyes, the G.J. Chamber stepped out of bounds after it formed a secretive political group, the Western Colorado Business Alliance, that takes in unlimited money and spends unlimited funds to get Chamber-backed candidates elected to local office. The Chamber did exactly that in the last City-wide election, only to have one of their winning candidates, Rick Brainard, get thrown in jail four days after the election for beating up a woman. Brainard pled guilty to assault on May 17.  Throughout his legal travails, Brainard has refused pressure from citizens to resign from Council, and will soon cost City taxpayers $50,000 for a recall effort. Making matters worse, the Chamber continues to back Brainard, making Grand Junction the first city in Colorado to allow a freshly-convicted criminal sit on its Council. Former G.J. Chamber member Harry Griff of the law firm Griff, Larson Laiche & Wright, told the Sentinel he quit the Chamber after being a member for 25 years, calling it “a very, very exclusionary group.” Another business owner, Marilyn Charlesworth, also quit the Chamber over it’s unwelcome political activity, calling it a “little boy’s club.” Other businesses to quit include the CandyTime Shoppe, Pablo’s Pizza and the Hot Tomato in Fruita. New businesses in town are also opting not to join the Chamber due to the firestorm of controversy surrounding the organization. Citizens who are outraged at Chamber activities are boycotting Chamber-member businesses and using Facebook to organize, share strategies and share names of businesses that belong to the Chamber and those that do not, or to name who recently dropped their membership. For its part, the Chamber’s leadership remains completely unapologetic. In response to a question Sentinel reporter Charles Ashby posed about whether the local backlash is having any impact on the Chamber’s decision to get more political in the future, Chamber president Diane Schwenke responded that yes, it’s had an impact, but only to the extent that it will make the Chamber try to become even more effective at its political involvement in the future.