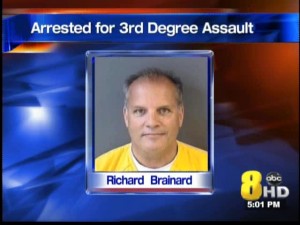 Grand Junction citizens breathed a huge sigh of relief yesterday morning after hearing the news that convicted criminal Rick Brainard had formally resigned from the City Council, effective immediately. In his official one-page resignation letter, Brainard said he felt unappreciated, that he is not a violent person, that he became disillusioned with City Council in part because an unnamed Council member had passed an angry note to him filled with underlining and exclamation points, that expressed irritation at how he had voted. Brainard said he has “reconnected” with his former live-in girlfriend, Cindy Franzen, the woman to whom he had given a black eye, that he has “reorganized his priorities around her,” and he speculated that “maybe its time for some new scenery.” TV news cameras showed a large RV parked in the driveway of his home, apparently being loaded up. But Brainard wasn’t done after sending that letter. He also sent a much longer version of his resignation letter to the Grand Junction City Manager, who in turn passed it on to Council. Brainard really spilled his guts in that letter. He named yet another Chamber of Commerce-backed Councilman Marty Chazen as the angry note-writer, and told Mayor Sam Susuras that “Your behavior upset me  so much that I am writing this letter today.” Brainard also castigated the press and media over their coverage of his assault and his subsequent events, which he said “lacked integrity,” and then he wrote the following to the citizens organizing to recall him, a group that, incredibly, he referred to as the “Re-Elect Rick Brainard Crowd”:

(To) The Re-Elect Rick Brainard Crowd: You are welcome. But be perfectly clear on this, my
stepping away has NOTHING to do with you. My comments here should be taken to
heart and you should seriously reflect on them as you move forward. You may want to
consider getting some counseling of your own. I have learned a lot about a topic from my
councilors that I knew nothing about previously, I think my counselors Dr. Saul
Tompkins and Patrick Mills for their advice and direction. You guys are wonderful. But
for this group that couches their behavior in the support of Domestic Violence victims.
Yet, when they produce a web site two thing ring very true. First, there is not a single
reference or link to a domestic violence resource. Does that seem odd? It does to me. It
suggests that you have gotten so caught up in being the bully that you forgot your
mission. Second, clearly you have become the bully, just flip through the pages and you
will see that. Again, I suggest you take a little of your own medicine and learn about your
own behaviors and how to best deal with them. Patrick Mills can certainly help if you
need a resource, he is amazing. The bottom line is this, I have reached out to you using
every means I know to do so engaging you to talk to me, actually get to know me and
learn that I agree with your Domestic Violence mission and wanted to use my position on
City Council to be your advocate. But you were not interested, because it diminished the
fun of being the bully. I’m sorry, but the best way for me to take the wind out of your
now poorly directed sails is to take myself away from you and point out to everybody
else how you have lost your way.

It is unclear what Brainard will do next.