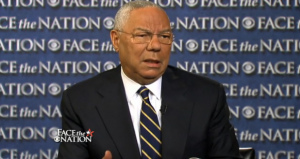 Former Secretary of State Colin Powell, a Republican, said on Face the Nation that Republican claims that “Voter ID” laws are necessary to prevent abuse of the voting process are specious. Gen. Powell said there is “nothing documented” to indicate voter fraud is a problem and that “nothing substantiates” the existence of widespread voter fraud or abuse. Gen. Powell said these laws were created to “slow the process down” and make it harder for Hispanics and AFrican-Americans to vote. He said he wanted to give Republicans the benefit of the doubt when they say they want to improve the voting system, “but when they start to say, ‘let’s restrict the number of voting hours or make it harder for students to vote,’ then I have to get a little bit suspicious of it.” Former Secretary Powell had a message for his fellow Republicans: “The country is becoming more diverse. Asian-American, Hispanic-Americans and African-Americans are going to constitute a majority of the population in another generation. You say you want to reach out, you say you want to have a new message, you say you want to see if you can bring some of these voters to the Republican side. This is not the way to do it. The way to do it is to make it easier for them to vote,” Powell said. “…And then give them something to vote for that they can believe in. It’s not enough just to say, we have to have a new message. We have to have a new substance to that new message.”  Powell further remarked that the new Republican laws that make it harder for minorities, young people and seniors to vote are “going to backfire” on the party.