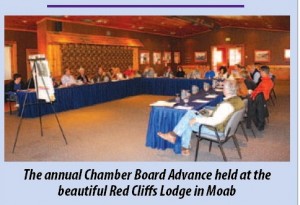 Photo of Chamber Board meeting at a lodge in Utah, printed in the Daily Sentinel.

The Grand Junction (Colorado) Area Chamber of Commerce urges citizens to shop local and “put their hard-earned dollars to work right here in your community.” Its “Blue Bandwagon Shop Local” campaign points out that patronizing local businesses helps create jobs in our area. In its full page ad in the November 25 Daily Sentinel, the chamber posted results from a “Shop Local Survey” and said that “85% [of business respondents] thought it was significantly or very important for the Chamber to promote shopping locally.”

But directly beneath the “Shop Local” survey is a photo of Grand Junction Chamber Board members attending their “annual advance” meeting at “the beautiful Red Cliffs Lodge in Moab,” UTAH — an establishment not just out of the area, but clean out of the state.

It isn’t too hard to tell what can be considered “local” around here and what can not. The Grand Junction area is basically surrounded by miles of high desert and mountains. The smaller towns that share the Grand Valley floor — Fruita, Mack and Loma to the west and Palisade to the east — could all be considered “local.” Even the towns of Mesa and DeBeque to the east would be considered local. You could probably consider any businesses within Mesa County, a huge county of over 3,300 square miles, as “local,” so the spectacular Gateway Canyons Resort, a 53 mile drive from downtown Grand Junction, could even be considered local. But at 113 miles away by car, Moab isn’t just out of the county, but clear in the next state. Most area residents probably would not consider Moab, Utah to be “local” to Grand Junction.

Besides Gateway Canyons, Mesa County boasts several truly impressive lodges with more than adequate meeting space for the chamber’s board. Most area residents can probably name two or three, like the Wine Country Inn, the scenic Two Rivers Winery and Chateau, Powderhorn Mountain Resort or the spectacular Kessler Canyon hunting lodge on 23,000 acres outside DeBeque.

So what does the chamber’s mistake tell us? The chamber doesn’t have anyone vet their ads before printing, for one thing. And their mistake actually affirms important points that the website GJChamber.info, which is critical of the chamber, has been trying to make: 1) the Chamber fails to follow its own advice, 2) its programs are often fake and implemented only for their “feel good” PR value, 2) the chamber’s leadership believes no one will notice when the chamber disregards its own “buy local” advice, and 3) the chamber doesn’t consult anyone before spending gobs of money on escapades that further damage its credibility with its members and the local public. According to the Daily Sentinel, an ad the size of the chamber’s 11/25 ad costs over $3,800, if purchased without a contract.