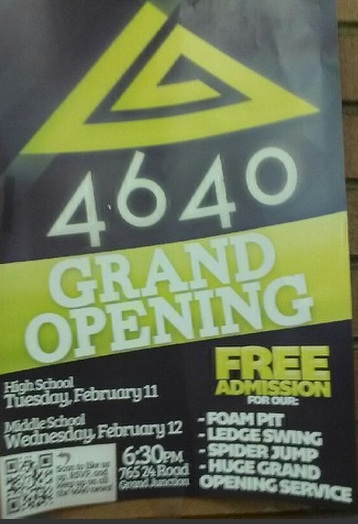 On February 11, 2014, a sixth grader at Grand Mesa Middle School, a public school in Grand Junction, came home and handed his dad a flier promoting a hip, new youth recreation center in town called “4640.” The child said he and his schoolmates were shown a video during gym class about the 4640 recreation facility and that the name “4640” was derived from a section of the Bible meaning “John 6:40.” Students were instructed to pick up fliers and permission slips to use the facility after the presentation.

The “4640” youth recreation center belongs to Grand Junction’s Fellowship Church, and it’s one serious kid magnet. The fliers students brought home were release of liability forms that advertised 4640 had “spider jumps,” a “giant swing,” a “foam pit” and a “sports court.” The website for 4640 also touted a food court where,

“A couple bucks will buy you more junk food than your mom would approve of. We’re talking about snacks high in sugar, low in nutritional value — just the kind of fuel you need to have a blast with your 500 other Middle School friends!” **

“Ever seen anybody eat a live cricket? Our Youth staff will do anything it takes to blow your mind.” **

Promotional posters for 4640 were also up at Grand Junction and Central High Schools. The posters (pictured above) did not mention that 4640 was actually at a church, that another exciting feature of the facility was a “worship pit,” or that kids using the facility would be subjected to religious indoctrination during their visits.

“The mission of 4640 is to reach young people with the Message of Jesus. Teach them with truth from God’s Word. Tend to their physical, spiritual and emotional needs. Send them out to be leaders for Christ in their generation…4640 is the collision of two worlds. It’s everything you ever dreamed or imagined as a place to hang with your friends, combined with a real, raw & authentic spiritual connection with God through Jesus.”

Promoting religion using public school resources and during class time is a violation of the Establishment Clause of the U.S. Constitution, which requires separation of church and state. Students can engage in religious activity on their own time and off of school grounds, but using taxpayer-funded class time to promote religion is a clear violation of law.

[[Update as of 3/7/14 : Since this article was first posted, Fellowship Church removed the above video promoting the 4640 Student Center from YouTube. But another, much longer video posted by Fellowship Church explaining that the real purpose of the 4640 Student Center is to recruit children into Christianity can be seen at this link on YouTube. The lecturer in this video says “What would bring teenagers to bring their friends? …Let’s set a Guinness Book of World Records by eating live ants.” She then says the church brought in high school principals to serve as judges in a live ant-eating event, where she admits organizers would “really talk to them about Christ.” The lecturer then describes how hyped the crowd of teenagers became at this event and then says, “What mattered to me is that  154 of those students accepted Christ for the first time.” (Begin watching the video at 10:24 to see this part.)]]

Understandably alarmed, the father of the above-mentioned student called the District 51 superintendent and the Grand Mesa Middle School principal to complain about the presentation his child was shown in gym class. The superintendent never returned his call. The principal did respond, to his credit, but said he was out of town when the presentation occurred and knew nothing of the video. He ordered the posters promoting 4640 pulled down because they did not bear the required approval stamp from District 51. The in-class video presentation itself was also unapproved by the District.

Was it a coincidence that the presentation was shown when the principal was out of town, or was it planned? No one seems to know, nor is anyone trying to find out.

In fact, so far no one has been held accountable for the incident. The school district has not contacted affected parents to let them know that despite all appearances, District 51 does NOT endorse the Fellowship Church, or any other church or religion. The District has not given the affected parents or the public any assurance that such presentations will not occur in the future.

Instead, in its only statement about the incident, District 51 said the presentation about 4640 was an “isolated incident” that “occurred where an error in judgment was made by one teacher.”

So if no has taken responsibility for the incident, no one is held accountable, and everyone claims they don’t know how it happened, how can District 51 possibly make sure it won’t happen again?

The answer is they won’t, and if the new information coming out in the wake of this incident is any indicator, it probably will.

It turns out that the in-school promotion of Fellowship Church’s youth indoctrination center is not an isolated incident, but the continuation of a longstanding pattern that District 51 has apparently willfully ignored.

Since information about the Grand Mesa Middle School proselytizing incident was broadcast on local news programs, former District 51 students have started stepping forward, in person and through social media, to say that such religious promotions are common in District 51 public schools.

“I personally have experienced this VERY activity during my time in a D51 school, as at the time the district-wide student council day retreat was held in… drumroll… Fellowship Church. And they managed to squeeze in plenty of bible talk between the scheduled activities and speakers. I thought it was wrong then, and I continue to think it is wrong now. In that particular situation we were bussed in, so had no way of leaving the facilities to not participate in the religious activities and dogma plastering the wall….I have had experience with the aforementioned Student Council event, as well as directly witnessing school staff members working with church officials on how to further those activities. I went to administration about the issues I had seen and was quickly shut down.”

“I went to a D-51 school and distinctly remember an abstinence-only presentation put on by a church in which students rolled dice to find out which STD they might get. It was very awkward. Not to mention creepy that a church was putting on a presentation in our school. I’m not sure if it was Fellowship or not.”

Another woman said her son was recruited to attend Christian Mountain Adventures’ Camp Redcloud, based in Lake City, Colorado, while attending District 51 schools. Camp Redcloud was founded “to serve and minister to the kids of Western Colorado and beyond,” and it’s mission is “To develop Christ-like character through challenge, empowering us to transform our world for a lifetime of true adventure.” 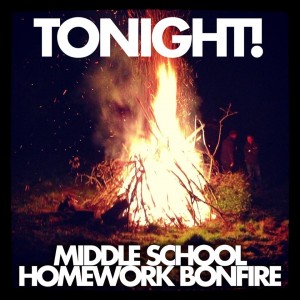 Still another young woman reports that while attending a District 51 middle school years ago, her class was shown a presentation about Vertigo, a night club-like facility also operated by Fellowship Church that, like 4640, is also located on the church’s property. As a result of the presentation, she visited Vertigo and eventually joined the church. Now, as an adult, she is an avowed atheist.

The Vertigo club still exists. Fellowship Church promotes it to middle school kids as “the one cool thing to do in this boring town.” One of the activities it promotes is a “Middle School Homework Bonfire.”

If the statements of these people who attended District 51 schools are any indicator, proselytizing in western Colorado’s public schools has been blatant for years. It is illegal, and it has been little-explored, reported or discussed — until now. So far, District 51 has not been held accountable for any of it.  Students who have been subjected to proselytizing in public schools are encouraged to step forward and report it here. Parents should be on the alert for any incidents in school where their kids report they felt pressured or enticed to attend religious facilities or participate in religious programs. Kids should also report to parents any presentations churches make in public schools, no matter what the subject matter. Parents can also report incidents of unwanted proselytizing at the next District 51 School Board Meeting on Tuesday, March 18 at 6:00 p.m. at the Basil T. Knight Center, 596 N. Westgate Drive, or phone the school district at 970-254-5100.

Mesa Valley School District 51 needs to quickly take steps to make certain that all school personnel know that proselytizing in public schools in any form is illegal, and should not be allowed to occur.

**[Update: Fellowship Church removed these statements from their 4640 website after they were highlighted in a press release by the local church/state watchdog group Western Colorado Atheists and Freethinkers.]