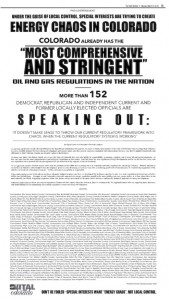 Vital for Colorado’s full page “Energy Chaos” ads, run in rural areas of the state, are aimed at derailing a potential ballot initiative to rein in corporate power over citizens

A new pro-fracking business coalition called “Vital for Colorado” (VfC) has sprung up to fight the growing grassroots anti-fracking movement in Colorado. VfC’s board chairman and registered agent is Peter T. Moore, a senior partner at the Denver law firm of Polsinelli, P.C., which serves the oil and gas industry. Calls and emails to Peter T. Moore and VfC seeking information on the group’s major funders and legal registration information went unanswered.

Most of VfC’s supporters (pdf) are chambers of commerce in more rural areas of the state, cattle and dairy farmers, trade groups like the Colorado Wyoming Petroleum Marketers Association, prominent construction and real estate companies, and oil and gas drilling companies like Encana and Suncor Energy, which is based in Calgary, Alberta, and not in Colorado.
So why has VfC gone to Colorado’s hinterlands to try to drum up support? Because VfC’s best chance to gain support appears to be away from the front range, where so far five front range cities have passed ordinances banning fracking within their limits, a fact that has apparently made a big impression on Colorado businesses.
In typical front group fashion, VfC’s website doesn’t list a phone number and only permits email contact through a web form, but the site does give a street address for the group: 4950 S. Yosemite St., F2 #236. Coincidentally this is the same address as the former office of the issue group “No on Measure 2A,” whose registered agent was also Peter T. Moore.

Out of Step with Public Sentiment

Measure 2A was a popular Denver ballot measure that passed in November, 2012 with a whopping 74 percent of the vote. It let Denver opt out of the state-mandated spending cap imposed by the Taxpayer’s Bill of Rights. Without raising tax rates, 2A immediately dropped an additional $68 million into the city’s budget, allowing the city to reverse cuts in library hours, provide free access to public swimming pools and recreation centers for all Denver school-aged children, double the number of children enrolled after-school programs, lower property taxes for low-income seniors and disabled people, hire additional police and firefighters and repave roads.

The whopping margin by which 2A passed shows how wildly out of touch the “No on Measure 2A” camp, and its agent, Peter T. Moore, were with the desires of Denver-area citizens. Moore’s new group, Vital for Colorado, seems to be equally out of touch with front range citizens’ desire to keep fracking away from places where they live, work and play.

This background may also explain why most of VfC’s supporters (pdf) are businesses and chambers of commerce located in more rural parts of the state. Probably correctly, VfC perceives its support base lies outside the front range, in more conservative areas of the state.

On March 10, VfC started running full page advertorials (advertisements that are in fact editorial commentary) in newspapers in more rural towns, like Grand Junction and Pueblo, which scream, “DON’T BE FOOLED…UNDER THE GUISE OF LOCAL CONTROL, SPECIAL INTERESTS ARE TRYING TO CREATE  ENERGY CHAOS IN COLORADO.”VfC’s “Energy Chaos” ads are aimed at counteracting the growing grassroots movement in Colorado to pass a constitutional amendment, currently called “Right to local Self-Government,” or Proposed Initiative #75, that would give cities the power to ban fracking and any other noxious pursuits, like hazardous waste dumps or factory farms, within city limits. The amendment would address the problem of overall corporate dominance and shield cities from lawsuits by corporations, their trade groups, or the state over passage of such protective measures.
VfC is also circulating a pledge to businesses asking them to sign on to saying they “oppose energy bans and patchwork regulations.”
Note how fracking proponents have started referring to anti-fracking ordinances as “energy bans” instead of “fracking bans,” in an attempt to arouse the fear that proponents of Proposed Initiative #75 are trying to ban all forms of energy.

Now, several months into the effort to get Proposed Initiative #75 on the ballot, a new “dark horse” has appeared in the form of a competing amendment called “Local Control of Oil and Gas Development,” or Proposed Initiative #82. This measure would only give cities the right to restrict the time, place OR method of oil and gas development, without allowing them to ban drilling outright. It is less broad and hence less powerful than Proposed Initiative #75, and the question remains about whether this measure was designed to give voters a more palatable measure to consider, or to confuse them outright. Confusion might be the name of the game, as backers of the weaker measure have organized under the name Local Control Colorado.