Colorado House Rep. Ray Scott may love fetuses, but he doesn’t care much about women and apparently doesn’t think much of kids, either.

Besides being a chronic no-show at election-time debates sponsored by the League of Women Voters, in January of 2012 Ray Scott co-sponsored HB1130, a bill titled “Penalties for Violent Offenses Against Fetuses.” The bill’s very title ignores the fact that typically the woman surrounding the fetus would be the primary recipient of any violent acts perpetrated against the fetus. But in Ray Scott’s mind, women matter less than their fetuses.

Ray Scott even supported a fetal personhood amendment in the past. Such proposals are among the ultimate affronts to women, since they are religiously-based efforts that would make it a crime for women to use some forms of contraception, in accordance with Mr. Scott’s own personal religious beliefs.

But there is even more evidence that Scott doesn’t care about women’s safety:

Evidence shows that widespread, unfettered gun possession poses particular dangers for women, but Rep. Scott consistently votes to liberalize gun laws to reduce restrictions on who can buy or carry them.

From 2001 through the end of 2012, fully 6,410 women were murdered in the United States by an intimate partner using a gun. That’s more than the total number of American servicemen and women killed in action during the entire wars in Iraq and Afghanistan combined. Of all the women killed by intimate partners during this period, 55 percent were killed with firearms. American women are eleven times more likely to be killed with a gun than the women in any other high income country.

Women between 19 and 34 also constitute one of the most significant uninsured groups in Colorado (pdf). In Mesa County (in Ray Scott’s district), almost 17% of the population remains uninsured, many of whom are women struggling to raise families on low incomes. Despite this, in May, 2011 Rep. Scott voted against establishing a health insurance exchange where low income Coloradans could arrange for federal subsidies to help them afford health insurance coverage for themselves and their families. 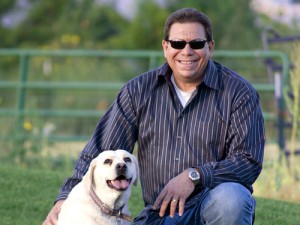 A grinning Rep. Scott poses with a well-fed dog, while hundreds of kids go hungry in Mesa County every week

Not content just to vote against women’s interests, Ray Scott is even anti-kid. On March 12, 2014, he voted against a bill that would make it illegal to cyber-bully a minor. He didn’t even bother to show up to vote on a bill to assure students attending public schools get appropriate vaccinations to reduce the spread of preventable diseases like whooping cough, chicken pox and rubella.

To what do western Colorado’s women and children owe these slights by Rep. Scott? Perhaps his ignorance keeps him voting the wrong way on so many issues. Rep. Scott’s educational level remains in question because he doesn’t list any information about his educational background on any of his biographical descriptions. Word is he only graduated from high school.

It’s a little late now for Rep. Scott to actively take an interest in women’s issues. If he did, it would only be for show anyway. He’s already proven they aren’t anywhere near the top of his priority list.