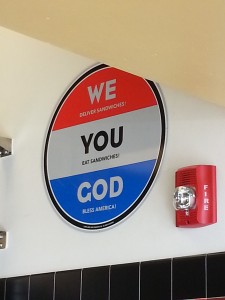 Religious sign posted in Jimmy John’s — an ominous sign that more wrong with the chain than meets the eye.

Under pressure from a family member, I tried a Jimmy John’s sub shop last week. I had never eaten at one before. I tried their “Vito” Italian sub with few hot peppers on it. It turned out to be pretty decent — good enough, I thought, to go to another Jimmy John’s store few days later and order the same sandwich again. It tasted just as good as the first one, but this was probably the last Jimmy John’s sandwich I will ever eat. Here’s why:

As I stood at the cash register ordering sandwich #2, I noticed a huge, religious-theme sign posted on the wall right above the place where you wait to pick up your sandwiches. I asked the cashier why there was a religious sign on the wall of their sandwich shop. She just said “It’s a corporate thing.”

That was my first hint that something was very wrong with Jimmy John’s. It seems like businesses that go out of their way to push a god-and-country meme on their patrons (pdf) often have a slew of bad things going on behind the scenes that they are trying to hide from the public. It was just a hunch, a gut feeling I’ve gotten over years of observing these things, so I checked it out. I hit the internet and started investigating Jimmy John’s.

Sure enough, my suspicions about the chain were confirmed. I found article after article about a wide variety of things that are very wrong not only with Jimmy John’s sandwich stores, but also the chain’s owner, Jimmy John Liautaud. The more I read, the more horrified I got, and the less I wanted to eat there again.

In 2012, Jimmy John’s was found to be the source of a multi-state outbreak of E-coli that sickened 29 people in 11 states. Seven victims had to be hospitalized. 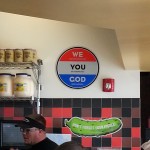 A vocal critic of income taxes, Liautaud owes the state of Illinois over $1.4 million in taxes on his 2009 purchase of two corporate jets. Jimmy John refused to pay the taxes by arguing that the jets qualified for a commercial transportation tax exemption. The state of Illinois didn’t agree.

Jimmy John’s also recently settled a class action lawsuit in California (pdf) for falsely advertising over a 2 1/2 year-long period that their sandwiches had sprouts on them. They didn’t.

Jimmy John’s has come under fire for making financial contributions to extreme, anti-immigrant politicians in Arizona, like Joe Arpaio (the Maricopa County Sheriff known for racial profiling, arresting his critics and locking up innocent people) and failed presidential candidate John McCain, who selected Sarah Palin as his running mate in 2008.

Two former Jimmy John employees from two separate store locations have also filed a lawsuit charging Jimmy John’s with committing systematic wage theft by forcing workers to work off the clock and refusing to pay them overtime. Jimmy John’s delivery drivers also sued the chain in 2013 charging that company stiffed them of wages and forced them to pay for their own vehicle insurance and maintenance. The chain has also been charged with crushing employees’ attempts to unionize. 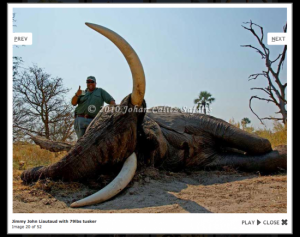 Pretty bad stuff all around, and all of the above would have been plenty to put me off. But by far the most repulsive thing about Jimmy John Liautaud is that he loves to go on canned (fake) hunts and kill threatened species of large, wild animals. Canned hunts are hunts where shooters pay large fees to “hunt” trophy animals confined inside fenced enclosures. Sometimes the animals are pre-wounded to make the hunt even easier for a paying shooter. Website after website shows horrific photos Liautaud grinning proudly over carcasses of endangered African elephants, leopards and even an Alaskan brown bear that he reportedly killed inside a wildlife refuge. 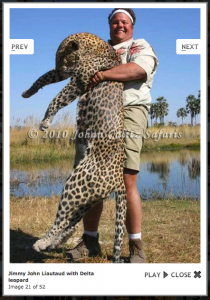 The public response to Jimmy John’s killing of endangered animals has been visceral. The Facebook page “Boycott Jimmy Johns” urges people to stop patronizing Jimmy John’s restaurants in response to Liautaud’s pointless joy-killing of endangered large animals. A petition on Change.org asks people to boycott Jimmy John’s sub shops until Liautaud stops killing exotic animals for sport. The petition asks Liautaud to make a public apology and give a donation towards wildlife preservation in Africa. The petition is now closed, but Liautaud offered no apology nor gave a donation as requested.

The above is all I need to know about Jimmy John’s. However good, fast or cheap their sandwiches may be, my appetite for them has been completely wiped out by what I now know about the chain and the truly disgusting behavior of Jimmy John Liautaud, the chain’s founder and namesake.