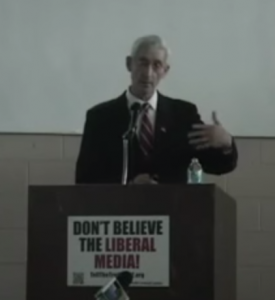 John L. Casey, a featured speaker at this year’s G.J. Energy Expo, gives a talk titled “Man Made Global Warming: The Biggest Scientific Fraud in History” to a tea party group in Florida

Club 20 is outing itself as a tea party group, and in so doing joins the Grand Junction Area Chamber of Commerce in shedding any pretense of being politically even-handed. Unfortunately, it looks like the same can now also be said for Colorado Mountain College, Colorado Mesa University and the other hosts and sponsors of the Club 20 Energy Expo and Forum.

Club 20’s annual Energy Expo and Forum is scheduled to be held at Grand Junction’s Two Rivers Convention Center February 27, and the keynote speaker at this year’s event is raising lots of eyebrows.

The Energy Expo is dominated by extractive energy pursuits, like drilling and fracking, but that is nothing new. It is hosted by the Grand Junction Area Chamber of Commerce (already a well-established arm of the local tea party), Club 20, Colorado Mesa University, Colorado Mountain College and the John McConnell Math and Science Center.

Given the respect for education and level of intelligence the public expects of at least some of the above sponsors (CMC, CMU and the Math and Science Center), members of the public are left scratching their heads about how such a nutty keynote speaker got selected this year.

John L. Casey heads a business called the Space and Science Research Center in Florida, and is the co-founder of another organization called the International Earthquake and Volcano Prediction Center.

Mr. Casey says global warming is a fraud, that global warming is now over, and the big threat we need to worry about now is disastrous global cooling. He says that in 2007 the sun went into a phase of “solar hibernation,” and predicts this will cause an increase in volcanic eruptions and earthquakes, and eventually lead us to disaster.

In a February 9, 2014 video by the Tea Party Channel uploaded onto YouTube, Casey stands behind a podium with a sign that says “Don’t believe the liberal media!” and tells the audience man-made global warming is a “fraud” perpetrated by the government.

The Palm Beach County Tea Party brought Casey to speak at an August, 2014 program titled “Man Made Global Warming: The Greatest Scientific Fraud in History — What do do about it!” 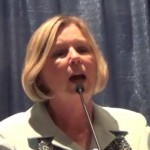 The Palm Beach New Times, which covered Mr. Casey’s appearance before the Tea Party group, reports that Mr. Casey has never published anything in a peer-reviewed journal. He has only self-published on the internet. When the reporter asked why this was, Casey said it was because “the importance of the findings and conclusions” in his work “mandated the widest public dissemination possible, which the web supplies.”

In an April 28, 2014 letter to President Barack Obama warning the President of the coming ice age, Casey wrote that the coming cold era would be “hardest on African Americans, other minorities and the poor” because “a large percentage of these citizens are largely dependent on the U.S. government for food, which we will start to run short of as the cold starts to damage crops.”

The New Times found that Casey’s CV (resume’) is “as spotty as a case of measles” and that Casey is a “clown act” who promotes “crackpot science.”

How did could Colorado Mesa University and the highly-respected John McConnell Math and Science Center agree to bring in such a wacky, fringe speaker?

That must be what happens when the Grand Junction Area Chamber of Commerce and Club 20 are left to run things by themselves. These groups refuse to consider alternative points of view and shut out anyone who disagrees with them. They are also the ones who play a large part in keeping the western slope the laughing stock of the state.

Sadly, western slope voters keep assuring over and over again that that remains the case.