In its 2015 Voter Guide, the Grand Junction Area Chamber of Commerce urged voters to approve Referred Measure 2B, which would have authorized the City to take on millions in debt to extend the Riverside Parkway along 25 Road. Almost all businesses on 25 Road strongly opposed the measure, saying the City blindsided them by failing to let them know measure even existed until it was safely scheduled to go on the ballot. The business owners opposed 2B because it would have let the city seize land fronting their businesses, and harmed their businesses by subjecting the road to an extended construction period. Curiously, the measure also would have zig-zagged the Parkway through existing business and residential areas instead of building it according to the original plan, which simply extends the existing Parkway route further west down River Road to 24 Road.

Once again, the chamber’s position on an issue was diametrically opposed to the one held by the very local businesses it claims to represent.

2B Went Down in Flames and Took the Chamber With It

Measure 2B went down by a wide margin — 62% to 35% — making it clear the chamber had zero clout in helping the City advocate the measure. In fact, given the chamber’s odious track record and lack of popularity, it’s support for the measure was probably a liability. After all, the chamber record is that of acting opposite to the interests of local business; it accepts big-box stores with out-of-state owners as members and often takes it’s own business out of town. You’d think the chamber might try to repair its terrible reputation by taking the side of local business owners for a change. So why wouldn’t they? Maybe the Chamber felt compelled to back 2B because the City pays $6,000/year to be a member, even though the City isn’t a business. A $6,000 membership is a decent chunk of the chamber’s $600,000/year budget. Could it have been enough to buy the chamber’s support over the wishes of local business owners? Chamber president Diane Schwenke will probably never tell us. 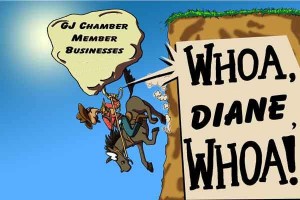 In another noticeable departure from how it acted in the city’s 2013 elections, the chamber did not appear to interfere in local elections this time, at least to the extent they had been. The chamber did not financially back any candidates for city council this time. In the 2013 election, the chamber funneled tens of thousands of dollars to its hand-chosen candidates (Norris, Brainard and Chazen) through its secret money group, the Western Slope Business Alliance, making the 2013 local election the most expensive in Grand Junction history.

This time the chamber did not continue its campaign-financing-on-steriods — a welcome relief for citizens who oppose the chamber’s political imperialism.

Perhaps the chamber is still feeling burned by its questionable foray backing Rick Brainard for council in 2013. Four days after winning the election, the G.J. Police arrested Brainard for beating up his girlfriend. Photos of the newly-elected Brainard in a yellow jumpsuit filled TV news screens, and the chamber continued to back him, infuriating local citizens. Brainard pled guilty in open court to third degree assault on the very same day he was sworn in to council, and after local citizens organized a recall effort, he finally gave up his seat on Council and fled the state. 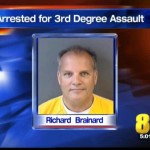 The chamber, known to be synonymous with the Mesa County GOP, also sought to control the D-51 school board in 2013 by backing school board candidates.

All of their chosen candidates lost.

The only chamber-backed candidate who won this time was Rick Taggart, and no doubt people will be watching him closely to see if he does the chamber’s bidding or the bidding of the people while on Council. After all, the chamber opposes pro-worker measures like raising the minimum wage, so they certainly aren’t on the side of most area citizens.

At any rate, the biggest winners in the 2015 local election at this point appear to be the people of Grand Junction. They seem to have successfully pushed back against the Grand Junction Chamber’s overbearing political interference in local elections, at least for now. The biggest loser is clearly the chamber itself, as it continues to grievously damage its own reputation by taking positions counter to the interests of the very same businesses it claims to represent.