On October 16, the Grand Junction Daily Sentinel reported that front range billionaire C. Edward McVaney had donated substantial funds to the three local “tea party” candidates in the District 51 School Board race: Patrick Kanda, John Sluder and John Lowenstein. The candidates admitted they didn’t even know who McVaney is, but took the money anyway. Soon after that report, the Sentinel revealed in a follow-up article that McVaney’s money came with strings attached:  the candidates were told to spend the funds on the campaign consulting services of Mark Baisley, who also lives and works on the front range. So who is Baisley?  He is vice chair of the Colorado Republican Party, and a Republican strategist and PR guy. A post on Baisley’s Facebook page reveals he believes that politics boils down to God versus Democrats, for one thing.  But even more interesting to locals should be a post on his page dated September 22, which appears to have been written by Linda Gregory, Chair of the Mesa County Republican Women (McRw). In her post, Gregory credits former Mesa County GOP chair Ruth Ehlers and the Mesa County Republican Party for successfully seizing control of the Grand Junction City Council in last spring’s election, and Gregory reveals that now the local GOP is going after control of the District 51 School Board: 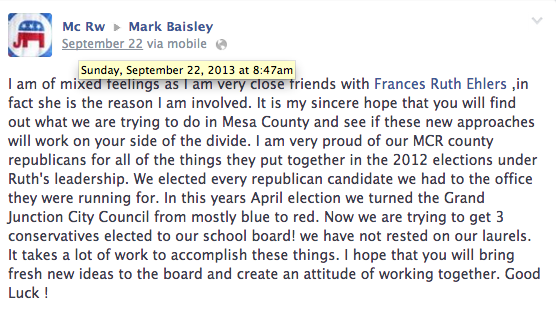 Several logical inferences can be drawn from Gregory’s post:

1) The Mesa County GOP is in full takeover mode, and is now trying to seize control of our area’s traditionally non-partisan elected bodies, like District 51 School Board and City Council.

2) The Mesa County GOP was the entity responsible for selecting Rick Brainard to run for City Council, a choice that led to the biggest political debacle this town has ever experienced.

3) The Mesa County GOP now has a solid track record of churning out a string of political misfits and whackos who have managed jointly to make the western slope into the laughingstock of the state. In 2006, while running for Lieutenant Governor on a ticket with Bob Beauprez, former Mesa County Commissioner Janet Rowland embarrassed Grand Junction by equating homosexuality with bestiality on a state-wide TV discussion show, “Colorado State of Mind.” Another former Mesa County Commissioner, Craig Meis, gained notoriety for his repeated Barney Fife-like attempts to use his elected office to get out of minor legal infractions.  The local GOP selected yet another gem, Jared Wright, who successfully ran to represent Colorado House District 54. After he was nominated, the Daily Sentinel revealed that Wright, a self-professed fiscal conservative, had undergone personal bankruptcy and had been fired from his job at the Fruita Police Department after an internal affairs investigation “revealed a pattern of dishonesty.” The local GOP also gave rise to Scott McInnis, who ran for governor against John Hickenlooper but was forced to quit after he was outed for committing massive plagiarism. The local GOP also was responsible for bringing us Rick Brainard, who gave Grand Junction citizens the most serious case of buyer’s remorse they’ve ever had. After they elected him to city council, he was arrested four days later for assaulting his girlfriend and then, to everyone’s horror, staunchly refused to make a dignified exit. Thanks to the local GOP, Grand Junction became the first Colorado city to have elected a confessed woman-beater to City Council. Oh, and the local GOP in all it wisdom ran Laura Bradford for state senator and got her elected over Bernie Buescher, a rising star in the legislature who was on track to run for governor. Bradford got busted for a DUI and quit the legislature.

And the list goes on. There are many more local Republican politicians who have had to put their tails between their legs and slink off in embarrassment. In the mean time, decades of GOP’s lock on Mesa County politics continues to assure that we have one of the highest unemployment rates in the state, that local wages remain among the lowest in the state, that our schools are last in funding, and that most of our elected officials hate our government are global warming deniers.

Now the same folks are pushing the three tea bag party candidates, Lowenstein, Sluder and Kanda, for school board. What matters to the local Republican Party is not whether these candidates are qualified, committed or a good fit for the offices for which they are running. The only thing that matters is their conservative ideology, and the local GOP’s ability to add control of yet another formerly apolitical body to their list of political victories.