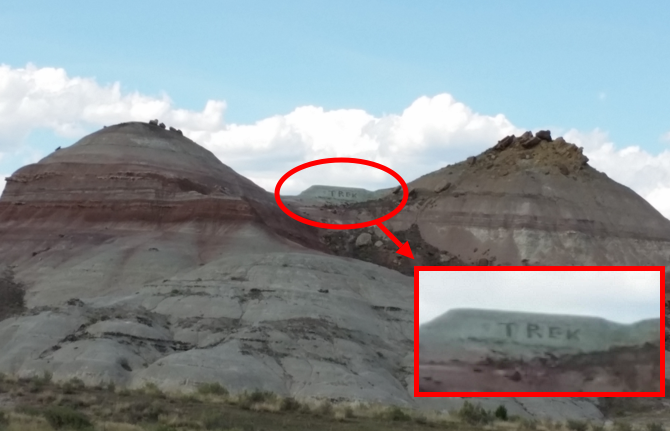 The mystery remains about who has been writing huge, cryptic messages using this hill on the Redlands for years now, and what drives him or her to do it

Back in December, 2014, I talked about the Mysterious Talking Hill Off South Camp Road. For years now, someone has regularly been climbing up this hill and scratching brief, huge messages into the green bentonite. The letters are probably at least 10-12 feet high. The writer changes the messages every other week or so. This task is far more challenging than using Twitter, which limits messages to 140 characters. The messages scratched into this hill are almost never more than four letters, tops. Repeatedly climbing up the crumbling scree to “erase” the old message and scratch in a new one can’t be easy, but some unknown person has been driven to do it frequently for at least six years now.

Sometimes the messages make sense. For example, around Mother’s Day it may say “MOM.” Near the end of December it may say “XMAS.” In May of 2014, when Google Street View caught a photo of the enigmatic hill, it said “USA.”

Google Street View captured the hill in May of 2014, when it said “USA.”

Maybe it had to do with the recent article in the Daily Sentinel about Jamie Bianchini, the man who went on an 8 year bicycle ride through 80 countries — an extended TREK. Or maybe the writer simply bought a new Trek bicycle and was glad as hell about it.

Here’s how to see the Talking Redlands Hill:

Take Broadway out towards the Redlands. Turn left at Monument Road, where the “W” gas station is. (Stop at the fabulous Trailhead Coffee House for Coffee if you have time). Continue on Monument Road toward the Colorado National Monument. When you get to South Camp Road, turn right and go a couple hundred feet to the dirt pullout directly opposite East Fallen Rock Road. There’s a big green electrical box there. Park and look for the dirt road heading generally northwest from the pullout, then look up at the Morrison formation hills just above it. Look a little to the right at a lower green bentonite hill lying between the two rock-covered peaks, as seen in the photo at the top of this article. See what it says and report back! And if you know who’s doing the writing, please do tell!