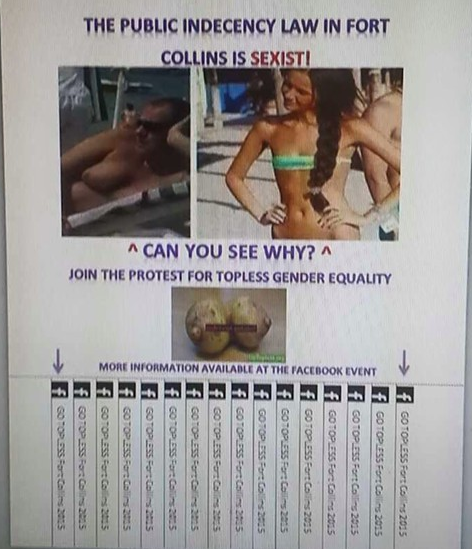 A campaign in Fort Collins to decriminalize the female breast says the city’s public indecency ordinance, which prohibits exposure of female breasts while allowing men to display theirs, is sexist.

Section 17-142 of Fort Collins’ city charter, “Offenses Against Decency,” states “No person shall knowingly appear in any public place in a nude state or state of undress such that the genitals or buttock of either sex or the breast or breasts of a female are exposed.”

But Brittany Hoagland of Go Topless Fort Collins points out that the ordinance conflicts with Article II Section 29 of Colorado’s Constitution, which states:

“Equality of the sexes. Equality of rights under the law shall not be denied or abridged by the state of Colorado or any of its political subdivisions on account of sex.”

The state law guaranteeing equal treatment of the sexes became effective January 11, 1973, yet a municipal charge of public indecency in Colorado can be considered a sexual offense that requires a convicted person to register as a sex offender.

In one of its fliers, Go Topless Fort Collins argues that the City’s current indecency ordinance shames women about their bodies. The flier also points out that while it is illegal for women to show their breasts in public, it is legal to purchase a magazine at any convenience store that shows topless women. Thus, while women cannot legally display their breasts in public, it is legal to sell images of womens’ breasts for profit. Another flier promoting gender equality (see photo above) shows a man with large breasts lounging topless in public in the sun, while a flat-chested woman enjoying the sun must wear a tiny band across her chest to hide her nipples from view.

To its credit, Fort Collins City Council has listened to its citizens and is considering modifying their ordinance to be less punitive towards women. In a public survey, Council asks residents if they prefer the current public indecency ordinance be amended to make an exception for breastfeeding mothers, or to simply allow all women to be topless in public.

Fort Collins City Council will consider these options at their October 20, 2015 meeting.

Meanwhile, back in Grand Junction, both sexes are already treated equally under the City’s public indecency ordinance. Nobody can expose anything legally. Grand Junction City Ordinance 9.04.180 states that it is illegal to “willfully or knowingly” expose “the breast or breasts of any person.” (Italicized emphasis added.)

So men, women, boys, girls and babies of Grand Junction: all of your breasts are ILLEGAL, so cover ’em up or go to jail.