A fringe right-wing Mesa County group that planned an open-carry protest October 10 in front of a Grand Junction mosque was forced to back down after a counter protest that was quickly organized via social media at the same place and time drew far more participants than the Muslim-hater event.

The larger (national) anti-Islamic group “Global Rally for Humanity,” which organized the protest at the mosque, was formed by a combination of the Oath Keepers and Three Percenters*, two radical, militaristic pro-gun, fringe right-wing groups that Mother Jones magazine calls “the Tea Party’s military wing.”

The Grand Junction protest was part of a global effort to stimulate anti-Islamic protests in front of mosques around the world on Saturday, October 10. The Grand Junction group created a Facebook event page to plan their protest. By yesterday afternoon (10/1), when word got out about the planned protest, only 17 people had signed up to attend the event.

In response to the Global Rally’s announcement of the protest planned at their mosque, the Islamic Center of Grand Junction issued an official statement:

“A salamoalaikom brothers and sisters.
Peace be upon all Grand Junction people.

As a Muslim community, we’ve lived in Grand Junction for many years, practicing our religion freely in a beautiful and peaceful city. We thank all Grand Junction people from other faiths who always support us.

We received messages from some good brothers and sisters from different faiths offering their support and warning us of a group of people who call themselves Global Rally For Humanity. This group is anti-Islam and they are planning to come and protest by our islamic center.

We welcome everyone to come including the anti-islam group. We want to let everyone know that we are a small and peaceful community and wish no harm to anyone be it a Muslim or non Muslim.
Our goal is to practice our religion freely and live in harmony and peace with everyone in town. We respect the law and constitution of the United States, and we also respect people’s way of life.
We are not here to impose our way on anyone.

Again, we thank people of Grand junction for their support. God bless you!” 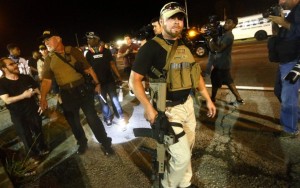 Armed “Oath Keepers” roamed the streets of Ferguson, MI, exacerbating residents’ unease after the death of Michael Brown. the Global Rally islamophobic group was a combination of the Oath Keepers and the Three-Percenters

When the event appeared on Facebook, however, Grand Junction resident Adam Anderson quickly organized Grand Valley Unites Against Islamophobia, a counter-protest event to be held at the same time and place as the Global Rally. The simultaneous protests set the stage for a potentially volatile showdown, but by the afternoon of October 3, 131 people had signed up to attend the counter-event, and the Islamophobic group cancelled their event and took down their Facebook page. Word is that the counter-protest will go on despite the cancellation of the original hate event. It will be non-violent and non-religious, and held to show support for Grand Junction’s Muslim community. Word is there will be cookies and drinks, and the event will go on all day on October 10, in case the original hate group is still planning the event using some other means.

This pushback against a fringe right wing event in Mesa County, conducted entirely on Facebook, shows an ongoing a culture shift continues in our area that is trending towards more a accepting and peace-loving attitude among area residents. It also shows that potentially dangerous “showdowns” with bigoted subgroups can be averted when such radical groups announce their intentions online. Social media allows peaceful counter-actions to be organized quickly against these kinds of inflammatory activities. Social media combined with an active, caring populace versed in its sue, can make all this happen electronically, before any gun toting, militaristic fringe groups actually show up on the streets and cause unease and confrontations potentially leading to injuries or deaths.

Go, Grand Junction, and thank you for this great case study in how social media can help sanity and compassion to prevail, and how it can be used to push back against bigotry and maintain peace in our community.

*UPDATE: October 4, 2015, 11:23 a.m. – Jesse Nelson, the coordinator of the Grand Junction Three Percenters group, reports that his group was not “officially connected” with this event, and made a formal request for this information to be added to this post.