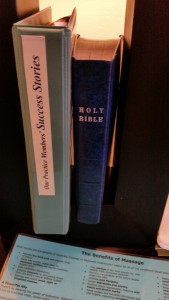 It’s no secret that some western slope health care professionals use their offices to proselytize, but doing so may have far different effects on patients than they intend.

One Grand Junction chiropractic practice puts TV sets in exam rooms so that, while the patient is waiting, they must watch ads suggesting, without foundation, that “spirituality” confers health benefits. Another chiropractic office’s phone recording chirps “Believe in miracles! We do!” at the end of the recording. Still another Grand Junction chiropractor has a Holy Bible on his waiting room table, crosses displayed prominently on the walls AND Christian music playing on the overhead speakers.

This type of proselytizing isn’t limited to chiropractic offices, either. A prominent Grand Junction orthopedic practice has a cross hanging at the cashier’s check out counter, that you have to look at as you reach for your wallet.

If you are a follower of the religion being promoted, it’s probably all perfectly fine. Such displays may be comforting to you, but in Grand Junction’s increasingly diverse, twenty-first century culture, not everyone belongs to the same religion, or to any religion at all for that matter. THAT makes these displays wholly inappropriate for a medical professional’s office. 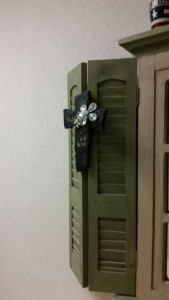 A cross is displayed at a Grand Junction orthopedic clinic

Health care professionals who use their offices to proselytize are exploiting the physical and psychological vulnerabilities of the people who come to see them. After all, people usually go see a health professional as a last resort, when they are sick, in pain or worried about a physical condition.

Religious displays have the effect of pressuring patients to accept that religion, or at least keep quiet about it if they don’t, and makes them feel like outsiders if they don’t. Patients waiting to see doctors under such conditions might easily wonder, “If I don’t belong to the same religion as the doctor, will I get the same time and level of care as someone who is ‘in the club?'”  Patients may feel like they need to hide their non-conforming religious affiliation during their visits, or may attribute a perceived shortage of time, a doctor’s brusque attitude or a perceived inadequate effort to diagnose a condition to the belief that the doctor knows you don’t belong to his or her religion.

Also, religious symbols that people of one religion find comforting can cause out-and-out discomfort, or even revulsion for others. A crucifix is a symbol of torture. Crucifying someone is “putting (someone) to death by nailing or binding them to a cross, especially as an ancient punishment.” This makes a crucifix a highly unsettling symbol for many that has no place in a doctor’s office.

Religious displays in medical offices also indicate that the doctors who work there sincerely believe in unproven, unverifiable claims and myths. Some patients may not want to be treated by a doctor who believes, for example, that “immaculate conception” is a real fact, or have their heart surgery performed by a doctor who believes in a talking snake, or back surgery done by a doctor who thinks he can just pray to God to heal his patients in case he blows it and makes your pain worse.

My observation is that religious displays are rarely a feature of medical offices in bigger cities. But they do seem quite common in small towns on Colorado’s western slope. I got a report about a similar but even more intense religious display in an optometrist’s office in Montrose, from an employee who was fired from that office shortly after he opted not to join the rest of the staff in praying prior to eating lunch at an office retreat. He had relocated his family to Montrose just nine months before to take the job, too. 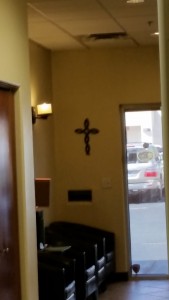 A cross on prominent display in a local chiropractic office

More appropriate adornments for a medical professional’s office might be things like a graduation certificate from a well known medical school, framed published academic articles, or even cards and letters from grateful patients who are success stories. If any of those are in short supply, there are always cute puppy pics. You can’t go wrong with puppy pics. They won’t alienate, offend, worry or concern anyone, or cause them to second-guess the doctors. Nor do they make patients think they’re not part of an exclusive belief “club,” because, after all, everyone agrees on the healing power of puppies.

Health care professionals have every right to believe in any religious myth they like, but if they want to inspire their patients to have faith and confidence in their healing abilities, medical professionals need to put their knowledge, skill, understanding of science and helpful attitudes front and center in their offices, not religious symbols.

2 comments for “What’s Up With Religious Displays in Western Slope Doctors Offices?”