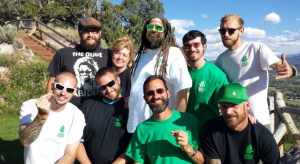 Staff of The Green Joint

The town of Parachute, Colorado, in Garfield County, is celebrating the opening of its first recreational pot shop today. Parachute has a population of about 1,000 people, and the new shop, called The Green Joint, has already created 20 new jobs in the town. Parachute is about a 45 minute drive east of Grand Junction on I-70. The Green Joint already has seven other stores in the greater Roaring Fork Valley, including in jGlenwood Springs and Rifle.

In June 2015, the Trustees of the Town of Parachute voted 4-2 to end their ban on recreational marijuana sales in the town, opening the town to the financial benefits of the state’s booming new legal marijuana economy.

It’s no wonder Parachute is celebrating the store’s opening, too. After suffering losses of tax revenue and jobs as a result of the latest downturn in the oil and gas industries, a new 3.5 percent tax on the Green Joint’s sales will go to support support the town’s schools, law enforcement, firefighting and other city services.

Mesa County and Grand Junction remain unable to take advantage of the booming new marijuana economy, since both jurisdictions have banned retail recreational marijuana within their borders, with the exception of incorporated towns within Mesa County, which can make their own rules regarding whether or not to allow marijuana sales.