House Rep Ray Scott (R) voted on 2/3/15 to kill a bill to provide economic help to rural Colorado communities that get hit with devastating economic events that cause mass layoffs.

The Daily Sentinel reported on January 28, 2016 that our western slope State Senator Ray Scott is considering running for governor of Colorado in two years. He’s considering the governorship in lieu of running for a national office like senator, because, he says, he “feels he can do more if he stays within the state.”

The notion is either side-splittingly funny or utterly tragic. Or maybe both.

The tragic part is that by mulling over his lofty ideas to the Sentinel, Scott is putting his narcissism on display for all to see. The funny part is that he’s been the worst legislator imaginable and has consistently acted to the detriment of most of his constituents, if you can call that funny. Maybe it’s the tragic part.

But tragicomedy is nothing new to the western slope Republican political crowd.

Mesa County has turned out a long list of arrogant, narcissistic, embarrassing and ineffective elected officials who have made western slope citizens want to hide our heads in shame.

Ray Scott has certainly taken his place among their ranks.

In case you can’t recall what the track record has been like, here’s a reminder of some of the politicians the local GOP has foisted upon us:

–In 2006, then-Mesa County Commissioner Janet Rowland publicly equated homosexuality to bestiality while on the state-wide television talk show “Colorado Matters.” At the time, she was a candidate for lieutenant governor on a ticket with Bob Beauprez.

— In 2010, now-Mesa County Commissioner Scott McInnis made statewide headlines and went down in flames after being hit with a plagiarism scandal during his own race for governor. While a sitting congressman, he finagled getting a national conservation area named after himself, in violation of House Rules that prohibit sitting congress members from naming public works after themselves. Now he opposes land conservation.

— In 2012, former State Senator Laura Bradford made her own headlines after getting arrested for a DUI in Denver with a gun in her car. After that unfortunate incident, Bradford “retired” from office and decided not to run for another term. Even worse, Bradford had unseated longtime west slope incumbent Bernie Beuscher, who at the time in 2008 had been on the verge of becoming Colorado’s Speaker of the House.

— While in office, former Mesa County Commissioner Craig Meis repeatedly broke the law and then tried to bully law enforcement officers out of giving him tickets by threatening them. Fortunately, none of them caved to his antics.

— In 2013, the Republican-backed candidate for Grand Junction City Council, Rick Brainard, got arrested for domestic violence just four days after being elected. He clocked his girlfriend in the head with his fist and pulled her hair, all in front of her 13 year old son.

— In 2014, western slope State Representative Jared Wright embarrassed himself and his constituents by leaving a loaded handgun in a legislative hearing room in the state Capitol building.

— In 2015, the Mesa County GOP’s favored candidate for Sheriff, and former state senator Steve King pled guilty to charges of embezzlement. He dropped out of the sheriff’s race.

Okay, there are just a few of the stupid things we’ve had to endure from local elected Republicans.

But Let’s Get Back to Ray Scott 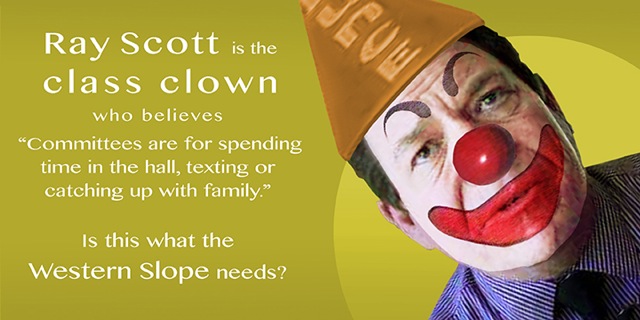 In 2011, Ray Scott, at the time a freshman in the Colorado House, wrote a funny newsletter for his colleagues he called “Lessons I’ve Learned.” In it, he explained what he learned during his time in the legislature. He wrote:

“Never be in the chamber until after the Pledge.”

“Committees are for spending time in the hall, texting or catching up with family.”

The newsletter earned him the title “Class Clown.”

In January, 2015, Scott introduced SB15-091 (pdf), titled “Reduce Statute Of Limitations Construction Defects,” a bill that would have protected developers from lawsuits after things went drastically wrong with the homes they built. Scott wanted to cut in half the amount of time Colorado homeowners would have to file lawsuits over egregious construction defects, from six years to three. This anti-consumer bill would have shielded homebuilders from accountability for significant problems and expenses homeowners incurred due to construction defects that appear just a few years after moving in a new home. Most states give consumers a 10-12 year window in which to file suits over blatant construction defects in a new home. Scott’s bill would have made Colorado one of the states with the smallest windows for consumers to gain recourse against shoddy construction.

Just a month after introducing the above bill, in February, 2015, Scott voted to kill SB 36 (pdf), a bill that would have provided economic help to rural communities in Colorado that suffer devastating economic events, like large-scale layoffs or plant closures.  Another western slope senator from Vail introduced SB 36 in the wake of the devastating closure of the Elk Creek Mine in Somerset, Gunnison County, after a fire struck the mine on October 1, 2013. The fire casued the layoff of 142 mine employees, forcing workers to leave the area to find more work, and causing a downward economic spiral that put pressure on the area’s housing market and schools. SB 36 would have provided one-time emergency grants to rural Colorado communities in the wake of such devastating economic events.

Scott voted to kill the bill.

In a shocking 2013 video he made as a House Representative, Scott, who has a high school education but did not go on to college, argued against increasing the amount of renewable energy required from rural electric co-ops to 20% within the next 6 years. The bill, SB 252, was ultimately signed into law by Gov. John Hickenlooper.

Scott said of the bill, “We have better things to do.” and “We’re going too darn far.” In the video he reveals his astounding ignorance of the scope of renewable energy and environmental issues by saying:

Besides being a chronic no-show at election-time debates sponsored by the League of Women Voters, in January of 2012 Ray Scott co-sponsored HB1130, titled “Penalties for Violent Offenses Against Fetuses.” The bill showed great concern for human fetusus, but ignored the fact that a woman surrounding the fetus would be the primary recipient of any violent acts perpetrated against the fetus. In Ray Scott’s mind, living women matter less than their fetuses.

Ray Scott even supported a fetal personhood amendment in the past. Such proposals are among the ultimate affronts to women, since they propose to criminalize women for using certain forms of contraception. In supporting this type of religiously-based measure, Mr. Scott’s sought to force his own personal religious beliefs onto the rest of the state’s population.

Not content just to vote against women’s best interests, Ray Scott has even shown himself to be anti-child. On March 12, 2014, he voted against a bill that would make it illegal to cyber-bully a minor, and he didn’t even bother to show up to vote on a bill to assure students attending public schools get appropriate vaccinations to reduce the spread of preventable diseases like whooping cough, chicken pox and rubella.

A Time-Waster in the Legislature

In 2014, Scott sponsored HB14-1046, a bill to create — get this — a Scottish-American license plate. To get the plate, all a person would have to do was prove they made a financial donation to a club called the St. Andrew Society of Colorado.

Yes, you read this correctly. Ray Scott introduced a bill to financially benefit a small private group that has no presence on the western slope. At the time, the St. Andrew Society had exactly one member in Silt and one in Montrose. They had no members or branches in Mesa County. The St. Andrew Society puts on only two annual events, both dinners  on the front range. Ray Scott was not a member of the group, and, according to Jean Casson, the group’s self-professed “mother hen” for 40 years, the Scottish-American constituency on the western slope has never been big enough to support a single pro-Scottish group.

So where did Ray Scott get the idea to introduce a bill that had no pressing need, benefitted virtually no one within his district, that had practically no constituency and that absolutely no one on the western slope asked him to introduce?

According to Casson, someone in the Denver area just happened to ask Scott to introduce the bill as a favor, so he did. 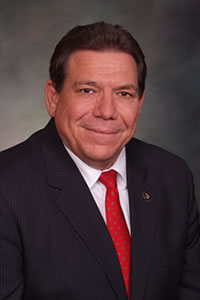 Scott continues to deny reality by opposing marriage equality for no rational reason, even after the U.S. Supreme Court ruled in June of 2015 that the Fourteenth Amendment to the U.S. Constitution guarantees that marriage is a fundamental right to which all American citizens are entitled (pdf). Of the issue, Scott says “Same sex marriage is nothing more than a grenade the democrats like to throw each year into the mix. The voters in Colorado were clear. Marriage is defined as a man and a woman.”

Scott has failed Project Vote Smart’s 2010, 2011, 2012 and 2014 Political Courage Test, which is intended to increase transparency in American politics.  The test just asks legislators to be open with voters and tell them where they stand on the top 10-15 most pressing issues of the day. It even lets legislators leave up to 30% of the questions unanswered, to accommodate fears of political sensitivity.

One thing we we definitely don’t deserve any more of is Ray Scott, and from the looks of things already, we’ve had way too much.

3 comments for “Ray Scott for GOVERNOR? Laugh or Cry, Your Choice”