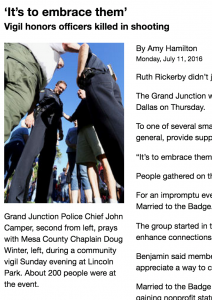 On Monday, July 11, 2016, the Grand Junction, CO Daily Sentinel published a photo of G.J. Police Chief John Camper praying in his uniform, at a religious event in a public park.

The event was organized by Heather Benjamin, formerly a Public Information Officer at the Mesa County Sheriff’s Office. It took place after the shootings of multiple police officers in Dallas, Texas just days before. It was meant to honor the victims of that mass shooting and find ways “to better connect community with law enforcement.” But it inadvertently sent a message that the GJPD prefers to be better connected with religiously-observant members of the community, rather than non-religious members.

No matter how serious or well-meaning such an event may be, Chief Camper actively praying on work time, in his uniform, on taxpayer-funded public property amounted to a government endorsement of religion, and violated the separation of church and state.

To get a better idea of what was wrong with this situation, imagine that Grand Junction’s Police Chief was a practicing Muslim instead, and imagine he attended a Muslim prayer event held in Lincoln Park, wearing his uniform, during which he knelt on the grass facing Mecca and prayed to Allah.

How well would that go over with Grand Junction’s taxpayers?

Probably not very well, and a photo of that in the local paper would have caused an uproar.

This one generated nary a peep.

So here is the point: No matter what the dominant religion in the area may be, all taxpayer-funded government agencies, their employees and official representatives need to remain strictly neutral in matters of religion while on duty. The Grand Junction Police Department should not publicly demonstrate favoritism for one religion over others, or for religion over non-religion.

Chief Camper would have abided by the establishment clause of the First Amendment to the U.S. Constitution, and avoided showing either religious bias or preference if he had attended this religious event in his uniform but had not actively participated in the prayers, or if he had attended in his street clothes and not as a paid City official.

2 comments for “More Government Endorsement of Religion in G.J.?”