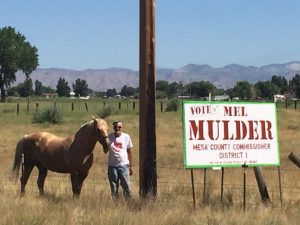 Some low-life has been stealing Mel Mulder’s hand-made campaign signs. Know who it is? Turn them in for a reward!

The race for Mesa County Commissioner in District 1 is heating up, and someone in Happy Valley is playing dirty.

Some unknown person has been stealing County Commissioner District 1 candidate Mel Mulder’s hand-made campaign signs. Mel, his wife, Vera, their friends and high school students painstakingly hand-made each sign in the summer heat to try to stretch the money Mel has raised for his campaign. Mel has raised about $1,385 so far, a fairly normal amount for a campaign for local office in the Grand Valley. By comparison, the incumbent Commissioner in District 1, John Justman has over $46,000 in his campaign fund, most of which — $31,500 — came from Justman’s own wife, Frances. According to KREX, Justman’s similar-sized, professionally-made signs cost about $500 each. Mel’s hand-made signs cost only about $100 each, showing that Mel knows how to do more with less.

Mel and Vera got permission from the landowners to place all the signs on the land where they were located. They’ve played by the rules.

Mel and Vera are not wealthy. They are average working people and can’t afford to replace innumerable stolen signs. They’ve managed to recover a few of the signs, and are offering a reward for information on who keeps taking them. 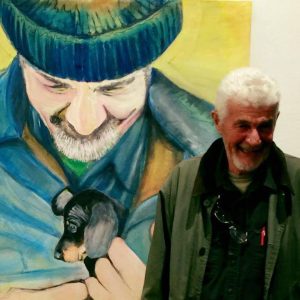 Mel in front of an original painting of him with a little puppy, by his wife, art teacher Vera Mulder

Mel is a handyman, business owner and farmer who has never taken federal subsidies, as Justman has. That could be one of the reasons why Mel Mulder poses a real threat to Justman. Mel is also a long-time public servant in Fruita. He’s served on the planning board and police commission, public works commission, parks and recreation board, drainage district, air quality control commission, and as a City Council member.

Twenty years ago, Fruita was struggling. Today we can all see how well the town is thriving, particularly compared to the rest of the County. Mel has the experience to hit the ground running as County Commissioner. He knows what’s fair and what isn’t, knows how to do more with less, is dedicated to finding sensible ways to quickly boost the economic fortunes of the Grand Valley, bring in more high-paying jobs and finally help bring people here out of poverty.

If you know who is stealing Mel’s signs, contact either this blog or Mel and Vera through Mel’s Facebook page: at https://www.facebook.com/melmulder4mesa/

Better yet, vote for Mel Mulder for County Commissioner this November and send Mr. Justman back to the farm.

1 comment for “Organized Effort to Undermine Mulder for Commissioner’s Campaign?”